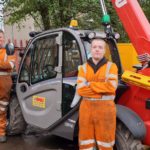 Arvill Plant and Tool Hire, the Airdrie-based family firm which has been servicing building and engineering companies large and small across Scotland since 1985, has taken on two young local men as apprentice mechanics.

Euan Wilson, 16 from Greengairs and Andrew Peden, 17, from Plains, both Airdrie, have secured apprentice mechanic roles with one of Scotland’s most successful and forward-looking plant and tool hire companies.

Amy Monaghan, Administrative Director at Arvill, said: “We are looking to expand our business and hiring apprentices like Euan and Andrew assists that process. By developing their enthusiasm and hard work into highly-regarded skills we secure both their careers and our company’s future success.”

Both apprentices left school this summer; Euan approached Arvill through his father, Andrew, who is one of the company’s customers. Having developed his interest in mechanics and motorbikes doing casual work for a local garage, he is now putting those skills to good use in the Arvill workshops. Andrew, the youngest of six siblings, wanted to learn more about the operation of large plant and had been doing volunteer work with a local waste management company.  He approached Arvill directly and has been supplementing his operating experience with training in Health and Safety procedures taught by the company.

Amy said: “Good apprentices are hard to find, and I’m very impressed with the eagerness to learn both Euan and Andrew are showing. Unlike most teenagers, Andrew was eager to start work earlier than our opening time of 8.00 am.”

“Both young men are hard-working, enthusiastic, and diligent. I can see them having a long and successful career within our growing Arvill family. They’ll finish their training programme with qualifications, experience and a good job ahead of them.”

Euan and Andrew are participants in a Construction Industry Training Board (CITB) programme and are undergoing a 3-year Modern Apprenticeship course with three 6-week attachments to the National Construction College in Glasgow, with the first due to get under way in October.