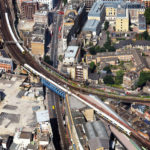 Civil engineering contractors have called for industry to work with Government to develop better measures of the way that the nation’s infrastructure improves the lives of people in the UK.

Historically much of the case for the construction of new infrastructure has focused on the economic impact it can generate, boosting local and national growth. But, in a landmark report published today, the Civil Engineering Contractors Association has shown the wide social benefits that also arise.

• A cross-sector working group should be established to create and champion a new national framework for the measurement of social benefits. This group would advise Government departments on how to consistently appraise and evaluate the contribution of different types of infrastructure investment to social outcomes, with data resulting from this work supporting business cases for future investment.

• The planning of future infrastructure projects and programmes should consider opportunities to spread the social benefits across the UK. In particular, consideration should be given to establishing infrastructure logistics and manufacturing hubs in former industrial towns and cities, creating new industrial heartlands that support multiple projects, create jobs, and re-balance the UK economy.

• There is a need to move discussion away from an either/or approach to delivering much needed investment in London and across the rest of the UK. Instead there should be a recognition that investment outside the capital supports growth in London and vice versa.

• To support the UK’s future infrastructure needs, the Government should maintain a commitment to gross public funding support for infrastructure that meets the 1.2 per cent of GDP fiscal remit set for the National Infrastructure Commission, while examining the case for higher social and economic outcomes if this ceiling was to be raised.

Commenting on the report, CECA Chief Executive Alasdair Reisner said: “Understanding how infrastructure affects people
in different ways is vital to good investment decisions. We have gone beyond the usual approach of estimating the economic impacts infrastructure can bring, but instead have considered how its benefits affect people’s lives in different ways. The benefits of long-term infrastructure investment are clear. Not only is there a strong economic outcome – previous CECA / CEBR research has found that every £1 billion of infrastructure construction increases overall economic activity by £2.842 billion – but the research published today demonstrates that there is also significant social benefit.

“Well planned infrastructure investment can not only transform how we all live and work, but it has a notable benefit for
those areas which have been left behind over the years.”