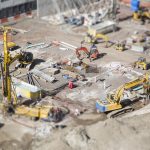 Leading property consultants have commented on the construction output figures published by the Office for National Statistics (ONS) on September 10th.

“After the last set of ONS figures showed an upturn following several months of decline, this second successive rise represents another much-needed boost to confidence in the sector. Underlying growth remains fragile however, and the real test will be if this can be sustained in the months to come, given the uncertainty over issues like Brexit that have impacted on UK companies’ commitment to new projects over the last two years.”

“In particular, separate figures published by the ONS recently show the lowest level of net migration from the EU since 2012, which has again raised concerns as to how construction will cope with a reduction of a skilled labour supply from the EU post-Brexit.  If sustained growth is to be realised, then the industry will need the workforce with the right skills, but this is far from clear at present.”