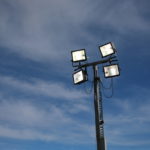 Growing Applications in Mining Sector Foster Growth
According to Fact.MR’s study, healthy recovery of mining activities has worked in favor of the growth of light towers market. According to the United States Census Bureau, mining witnessed one of the highest absolute increases in terms of capital investments, i.e. 75.9 percent from 2006 to 2015. Post a remarkable downfall during first half of the decade, the resurgency in mining sector has worked out in the favor of light tower manufacturers.

As per the study, demand for diesel light towers will reach 105 thousand units in 2019 and is not foreseen to slow down in the future. Rising popularity of diesel-based light towers can be accredited to minimum maintenance requirements, better fuel accessibility, enhanced performance consistency, and superlative storage capacity. Battery and solar light towers will remain the second and third lucrative categories in terms of sales. 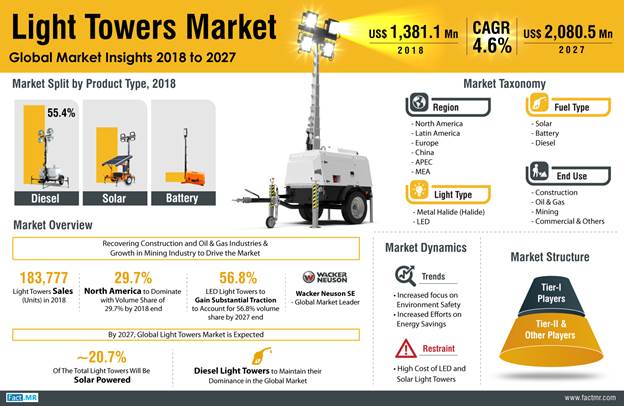 The report opines that LED light towers will outsell the halide variants in 2019. The trend toward light-emitting diode (LED) lamps is more evident than ever in the light of cost-effectiveness and enhanced illumination quality as compared to that of traditional metal-halide lighting. Being nearly twice as fuel-efficient as the halide variants, LED light towers have been identified to register the fastest Y-O-Y growth in 2019.

Construction remains the largest end use industry in the light towers market, driven by the large-scale deployment of light towers to ensure utmost productivity and workers’ safety during poor lighting conditions. Oil and gas industry trails the former in terms of demand for light towers as a result of soaring investments.

The light towers market remains moderately-consolidated with limited number of companies holding a substantial revenue share. Some of the significant entry barriers, such as high cost of manufacturing and uncompromising environmental regulations, act in favor of these well-established players in the market and help them maintain their stronghold. The tier 1 players account for nearly 38-41% revenue share with an utmost focus on strengthening of customer centricity.

The top-tiered companies also remain oriented toward offering distinguishable products and services that are economically and environmentally responsible for enhancing customer values. In addition to that, the report also unveils that these leading players in the light towers market will be seen concentrating on strategies facilitating inorganic growth for solidifying their sustenance amongst fierce competition.

The report enunciates that the light towers market is likely to proliferate at a CAGR of over 4% through 2027.