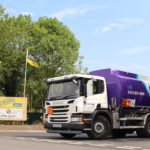 Jackson Civil Engineering has taken its first delivery of Shell GTL Fuel, as part of a trial to find a cleaner burning alternative to diesel. The fuel is being used in plant on Phase 2 of the Environment Agency’s Perry Barr & Witton Flood Risk Management Scheme.

The £32 million project will hold 1.7 million cubic meters of water and reduce flood risk for 1,400 properties currently at risk of flooding from the River Tame. The decision was made to trial the cleaner burning alternative, Shell GTL Fuel, in an attempt to reduce levels of air pollutants during the second phase of the project.

Services Manager at Jackson Civil Engineering, Andy Lusher said: “Previous trials have shown that GTL fuel can significantly reduce nitrogen oxide (NOx) and particulate matter emissions so we were keen to give it a try on our sites. The Perry Barr and Witton scheme offers a unique opportunity to introduce alternative fuels to reduce on-site emissions and with Birmingham’s active consultation on the new Clean Air Zone proposed for 2020, we felt this was the perfect site for the trial.” The Perry Barr site will be the first construction site in Birmingham to be powered by Shell GTL Fuel, which is supplied exclusively in the UK from Certas Energy. The fuel is also free of unwanted components such as sulphur, metals, and aromatics, which helps to minimise its impact on the environment compared to conventional diesel. It produces less odour, smoke and engine noise – creating a healthier working environment for workers and reducing disruption to the local community.

Leigh Claridge, Regional Manager at Certas Energy, said: “Shell GTL Fuel is supplied exclusively to the UK via Certas Energy, it’s a proven and pragmatic solution for contractors and the construction supply chain to improve the environmental impact that construction projects have on local air quality. We’re delighted to be partnering with Jackson Civil Engineering on the Perry Barr and Witton project where the benefits of Shell GTL Fuel contribute to delivering the project responsibly and protecting the natural local environment.”

Josh Harris, Environment Agency Project Manager for the scheme said: “This is a very exciting scheme, that is also proving the value of partnership working.  In addition to reducing the flood risk and improving the public space for the community, Jackson can fully support us in achieving many of our environmental goals, including the use of cleaner fuels – it’s a win-win for everyone.”