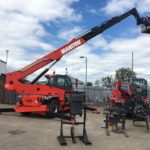 Jarvie Plant Group Geared Up for Growth in Aberdeen

Almost 3 years after opening the doors of a purpose-built hire depot on Aberdeen’s East Tullos Industrial Estate, Jarvie Plant Group say they’re now firmly established and geared up for growth. The Grangemouth-based firm are now working with businesses across a whole range of sectors including house building, construction, local authority, events and renewables.

On Wednesday last week Jarvie Plant hosted a Demo Day at their 1.5-acre facility on Greenbank Road at which an array of hire equipment, including plant, accommodation and vehicles, was on show. The firm recently announced it had made a further ‘significant investment’ in its fleet of hire equipment with the addition of telehandlers, rotating telescoping handlers (rotos), access platforms, and industrial forklifts. To cope with the demand from the construction sector and house builders, all of the new machines will be made available across the Group’s network of 9 depots serving Scotland and the north west of England.

“We have enjoyed a steady start since opening in Aberdeen and we’re more than ready to support some major new projects in the region,” says Jarvie Plant Group’s sales director, Ian Hutchison. “As the long awaited AWPR nears its final completion we’re in a strong position to provide high quality equipment to projects such as Countesswells or the expansion of Aberdeen Harbour.”

Jarvie Plant’s depot is located to the south of the city centre which according to their regional operations manager, Graeme Milne, has proved to be of strategic importance since opening: “Being based where we are means we are very accessible from the main routes leading into and out of the city allowing us to react quickly to customer requirements. In one recent situation we provided Aberdeen Harbour’s principal contractor with 12 tonne and a 16 tonne self-propelled rollers within an hour of an order being placed.”

Last winter, the firm also provided several telehandlers which which were used to load up gritters in the Aberdeenshire region from October to March. Following the completion of AWPR the next major infrastructure project will be the upgrade of the 108-mile-long railway line between Aberdeen and Inverness due for completion in 2030.

“We have extensive knowledge and experience of similar projects having supplied plant to the Borders Railway, M8, M74 and Queensferry Crossing in recent years,” added Mr Hutchison. “In that particular project our 360-degree rotational telehandler provided the client with a significant saving.”