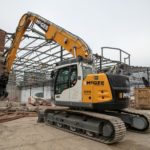 McGee Group is working on the Park Royal project for the HS2 Skanska, Costain, Strabag (SCS) joint venture team undertaking large-scale demolition. The company was looking for a dedicated smaller high reach machine to undertake demolition works in this kind of space-restricted inner-city location. Liebherr came up with a bespoke solution based on an R 926 Compact base machine.

McGee Group has landed a large project just a stone’s throw from its offices in north London. Working on the Park Royal project for the HS2 Skanska, Costain, Strabag (SCS) joint venture team, McGee Group is undertaking the large-scale demolition of a range of industrial and office buildings on a section of the Bethune Road industrial estate that will be excavated to become the Victoria Road Crossover Box.

Site limitations precluded the use of large machinery at this stage of the project and it was down to three of the company’s Liebherr excavators to begin clearing the buildings. Two of the machines were demolition specification R 922s and the third machine was a bespoke machine: the first 12 m high reach built on an R 926 Compact base machine.

When McGee Group was looking for a dedicated smaller high reach machine to undertake demolition works within space-restricted inner-city locations such as this one, there was no suitable machine available on the open market and the company entered into discussions with Liebherr-Great Britain. After a technical meeting at Liebherr’s manufacturing facility in Colmar, France, which specialises in bespoke solutions for Liebherr customers, Liebherr’s engineering team built a bespoke machine for McGee Group. 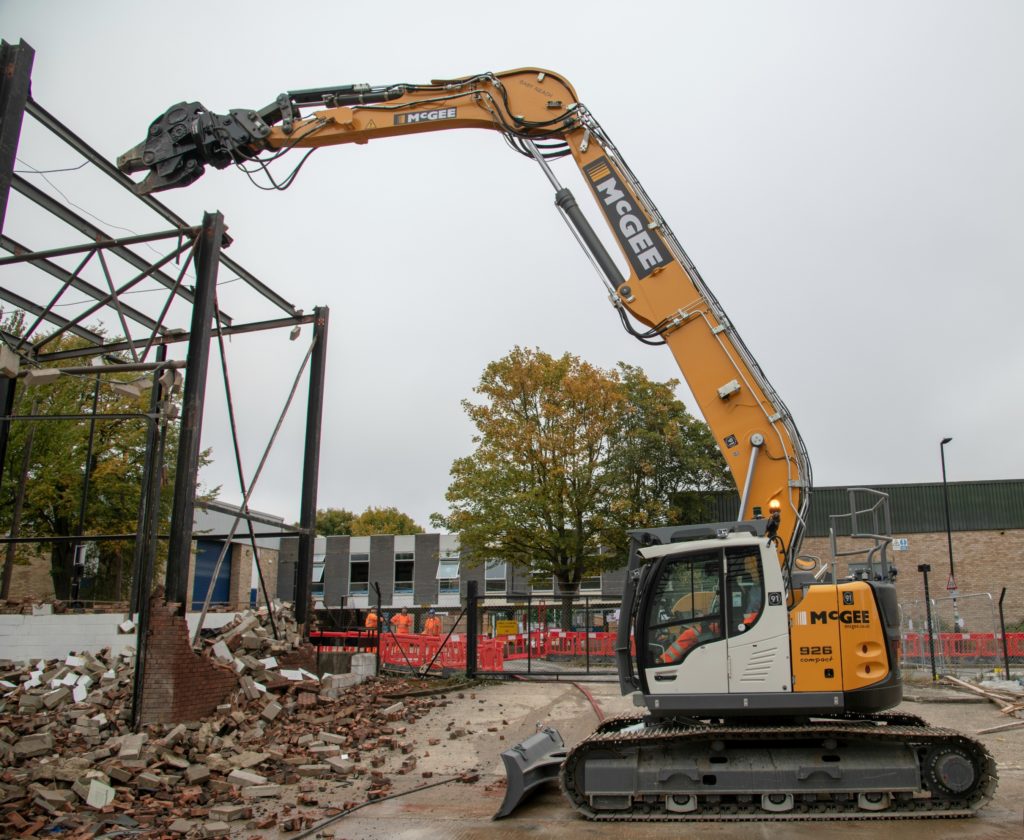 Using the base of an R 926 Compact, they removed the standard excavator front end and replaced it with a two-piece boom and dipper capable of giving a pin height of 12 m and of running a work tool with a weight of up to 2.5 tonnes. The boom configuration comprises a 7.8 m main boom with a 5 m dipper stick. An underslung dipper ram allows the machine to be reduced in height for transport and for accessing tight locations if and when required. A full range of additional hydraulic services has also been included to allow for a variety of attachment options to be fully utilised. A full ROPS and FOPS demolition cage has been specifically fabricated and tested for the R 926, which has a slightly shorter cab than the standard counterweight machines.

The R 926 Compact base machine weighs up to 28 tonnes depending on the specification. McGee Group’s adapted version weighs in excess of 29 tonnes thanks to the heavy-duty construction. Fitted with a fuel efficient and emissions compliant 175 HP diesel engine, the excavator is ideally suited to working in city centre locations. The cab interior is as standard apart from the addition of a James Fisher Prolec system that has been designed to manage the Liebherr’s working envelope with both a visual and audible signal alerting the operator if they reach the safe working limit.

A steel framed industrial warehouse of one and a half stories with brick cladding was the first building being cleared on the site. Operated by Tom McGee and equipped with a Demarec shear, the R 926 was used for a multitude of jobs including dismantling the steel framed structure and the secondary processing of steel once it was on the floor. After having used it for just a couple of days, Tom commented: ‘It seems to be a very good machine. It’s typically Liebherr: very well built and will be great for jobs like this.’

Liebherr’s client-focused innovative approach, as evidenced by the bespoke solution it created for McGee Group, was recognised by the National Federation of Demolition Contractors (NFDC) with an ISP Innovation Award that the company picked up at an awards ceremony earlier this year.