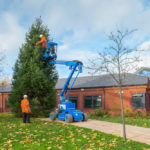 Nationwide Platforms has donated the use of a MEWP to the John Eastwood Hospice in Sutton-in-Ashfield, Nottinghamshire, to help the charity raise more than £11,000 in its Christmas appeal.

Each year the hospice raises an average of £11,000 via its Tree of Light appeal. Nationwide Platforms’ MEWP was used to decorate the tree with the lights.

Hospice Trust Manager Diane Humphreys explained: “The magnificent tree has been part of our Christmas season for more than 25 years. It stands in the Hospice gardens and is decorated with hundreds of tiny white lights, dedicated to those we remember. Donations are invited from individuals and local organisations and businesses until 12th night, and so the tree raises vital funds for the Hospice, as well as being a symbol of light and hope.”

The tree is donated by Collis Engineering (a Nationwide Platforms customer) and transported free of charge by Spiralway Transport to the Hospice.

The John Eastwood Hospice opened in December 1991, and since then has been providing specialist palliative care services for those in its community with advanced cancer and other life-limiting illnesses. The charity relies entirely on fundraising and donations to meets its many commitments.