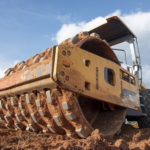 Demand for pneumatic rollers in the soil compaction machines marketplace is projected to expand at a relatively higher pace throughout the period of forecast owing to their higher efficiency in soil compaction process. However, the report estimates that sales of pneumatic rollers are likely to remain at a relatively lower base. Sales and demand of single drum rollers, particularly the 8-12 ton and above 15 ton variants, are estimated to account for a significant share in the heavy soil compaction machines and the overall market.