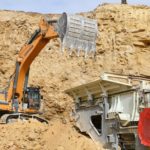 Quarrying and recycling specialist Wentvalley Aggregates & Recycling Ltd owns and operates a state-of-the-art recycling facility within the grounds of a yellow limestone quarry in West Yorkshire where recycled material is sold alongside virgin material removed from the quarry.

The operation, which has been going for over eight years, is owned and run by Russell Meakin and currently produces in excess of one million tonnes of mixed material per year. There has been significant investment in upgrading plant and equipment to deliver a constant flow of material and when the company invested in a 90 tonne Giporec R170FDR jaw crusher, an equivalently substantial machine was needed to load it in order to maintain the high production rates required at the quarry.

Having successfully used a Liebherr R 974 excavator for almost a decade, Wentvalley decided to purchase the 80 tonne excavator’s replacement model and has recently taken delivery of a new R 976. ‘We looked at other manufacturers but have had a good relationship with Liebherr,’ said Russell.

Regular operator of the Liebherr, Rob Netherwood, has been operating excavators for over 40 years and praises the Liebherr product: ‘I have been on a number of Liebherr excavators over the years, starting with an R 932, and when they are set up right they are by far the best diggers out there. We need a large excavator on site to keep up with the crusher. Anything smaller than this would really struggle.’ 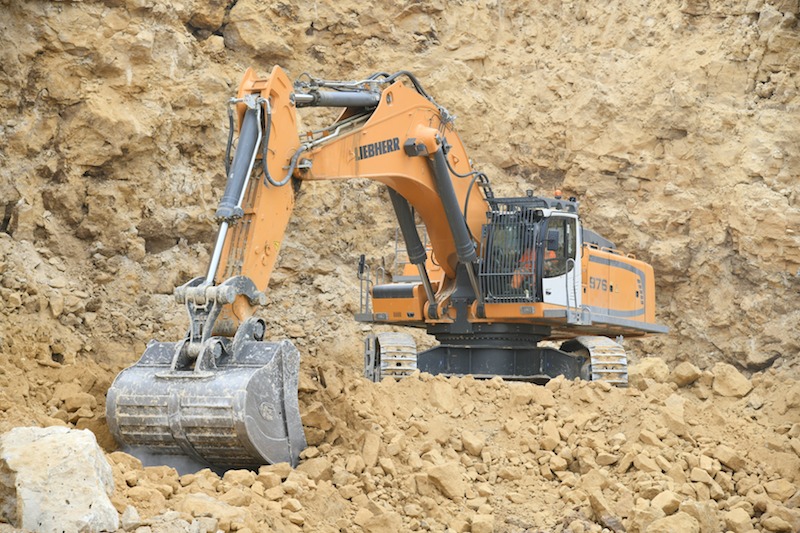 Fitted with a 5.5 m3 direct mount bucket, the R 976 has been supplied with a 7.2 m mono boom and 3.3 m dipper, which is designed to give a combination of excellent breakout force and reach to load the crusher’s hopper. Rob is able to reach enough material to keep the crusher operating for about half a shift, working on a 3 – 3.5 m high bench of blasted material. The combination of a 14.1 tonne counterweight and a heavy-duty 3.5 m wide undercarriage ensures the excavator remains totally stable even at full reach with almost 10 tonnes of material in the fully outstretched bucket, which is a larger capacity version than on the older machine. Once the pile of blasted material has been exhausted, the team can quickly reposition the feeder conveyor, crusher and excavator to the next bench where operations are resumed for the remainder of the shift.

600 mm double grouser shoes give the excavator ample traction to get up onto the loose material and the large, heavy-duty galvanised access ladders mounted to the track frames have been designed to deflect errant rocks. Combined with a sturdy handrail and access catwalk, the climb to the cab is quite easy and Rob is generally pleased with the upgrade on the Liebherr cabin compared to the older R 974.

Power to the excavator comes from Liebherr’s own 16 litre V8 engine, which delivers 544 HP at 1800 RPM. An AdBlue SCR system brings the engine up to Tier 4f exhaust emission standards with the machine claiming to be more fuel efficient than its predecessor. However, for Wentvalley production is the most important thing: ‘We need to get the material out of the gate and to do that we need to put it through the crusher and the Liebherr helps us achieve that,’ Rob said.

An impressive ground level reach of almost 13 m means Rob can clean a large area of blasted material around the excavator before it needs repositioning and a load over height of more than 8 m enables the R 976 to work on the quarry floor when from time to time it is called on to rip out areas of it to expose suitable material. ‘Without the weight and power of this machine, we wouldn’t be able to do this job,’ said Rob, who was also keen to mention Liebherr’s service provision: ‘The older machine was looked after by the Wigan depot and the backup we have had from them was exceptional. We are hoping for more of the same from the Sheffield branch, as and when we need it.’

0 0 0 0
Previous : Material Handling Industry Warned to be Ready for Winter
Next : Doosan Leads the Field at LAMMA 19