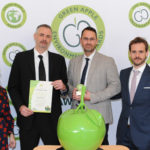 AJC EasyCabin, the leading pioneers in the production of sustainable temporary accommodation is celebrating their win of a Green Apple Gold award from the Green Organisation.

AJC’s Simon Fletcher, Jose Martin & David Hallam, representing the company’s engineering and marketing departments, were invited to the Houses of Parliament to accept the Green Apple Gold Award for their product the Solar Box (patent pending).

“The power needed to operate these facilities is usually provided via a generator fuelled by diesel. The generators are sometimes running continuously with heavy usage, thus expelling harmful exhaust emissions, alongside the expensive use of fossil based fuels. The Solar Box also reduces noise.” continued Simon.

The benefits of the AJC EasyCabin Solar Box system include:

AJC EasyCabin has also recognised that heating efficiency was necessary in temporary accommodation. Therefore alongside the AJC EasyCabin Solar Box they have produced an ‘Air’ diesel heating system that saves energy and lowers noise when compared to standard heating. The heating system is fully automatic and does not need a generator for the heat to be produced.

The Green Apple Gold Award was presented to Simon, Jose & David on 12th November 2018. This is the third such award, having already secured a Green Champion Award in 2017 and a Green World Award earlier this year.

The Green Apple Awards began in 1994 and have become established as the country’s major recognition for environmental endeavour among companies, councils, communities and countries.

EasyCabin is the brand name for static and mobile welfare accommodation units manufactured by AJC Trailers Limited. The company has been around since 1964 and presently operates from a modern 32,000 sq. ft. plant, based in Luton, Bedfordshire. EasyCabin products are used widely in the Construction, Rental, Rail and Events markets.