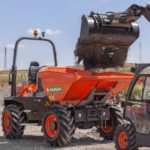 The site dumper market is on the move and one Spanish manufacturer has the experience and expertise to shape its future. Construction Plant News reports from the Ausa production facility The UK’s site dumper sector has seen some significant new developments in recent years. In an effort to address some of the issues of visibility and operator comfort, that the largest models in particular have experienced, new players have brought pioneering concepts to the market. As a result, this relatively humble muck shifting solution has been the focus of an on-going and concerted process of improvement – a journey which has been mirrored by a Spanish manufacturer who can already boast more than 60 years of experience in the field. In the shadow of the imposing and vertiginous peaks of Montserrat, just north of Barcelona, lies a construction equipment business which three years ago witnessed a capital increase of 30 per cent.

Today, Ausa can claim fresh impetus as a manufacturer as a consequence, and is itself aiming much higher. What followed has been substantial investment in everything from tooling in the factory, to training, IT and R&D. Just as in any good restaurant, less choice on the menu invariably guarantees a better meal and that’s why this Barcelona-based company also rationalised its product range.

A Plan for the Future

Construction Plant News was ourselves given the opportunity to experience the Ausa production facility first hand, and it is a site that does not disappoint. Ausa introduced its first compact dumper in 1961, with telehandlers following in 2008 and now has a presence in 90 countries, but just how will the end user benefit from an investment in this distinctive green and orange equipment? The company’s articulated dump trucks range from 1 – 10 tonnes, with a choice of either Kubota or Deutz engines.

Units up to 4.5 tonnes are exclusively the former, in fact, whilst there is a choice of Kubota with DPF or Deutz without DPF on machines over 4.5 tonnes. Ausa was the first company to introduce a Diesel Particulate Filter onto a dumper in the UK and, given that these units will often spend a significant amount of time idling – even when the operator is explicitly told not to – it can be problematic, which is one of the motivations for the added protection of the newly developed SmartStop system, which automatically switches the engine off when idling, thereby protecting that DPF but also saving fuel. Of course, the six tonne dumper remains the market’s volume product and that’s why the latest improvements have been seen in this category – specifically the D601 AHG – but these are enhancements that will ultimately permeate throughout the range. Not all of these will be immediately apparent – but are no less significant for that. Take the axles, for instance, which feature protected technology in the form of epicyclic final reduction and sealed brakes. Ausa has also worked with its suppliers to improve the additives used in its body paints, increasing the longevity of that vibrant orange and contributing to improved residuals when it’s time to sell.

At present, the smaller models use hydrostatic 4WD, with 6 tonnes and up using torque converter transmissions. In the future, however, most new sales – including the aforementioned six tonne D601 AH – will be in hydrostatic, with the safer and smoother ride that entails. Not only that, but the technology allows for a Hill Holder function that will automatically prevent the machine from rolling back when positioned on an incline, even when loaded.

Whilst the six tonne size remains the solution of choice – and UK buyers seem to increasingly gravitate towards either 1, 3 6 or 9 tonne machines – Boss Plant Sales sees the Ausa D450 as a very marketable model for the UK. “The 4 ½ tonne Ausa is equipped with a full visibility system, just as its bigger 6 tonne is, and the skip capacity is not that much smaller,” explains Graham Stansfield. “Given that it is a cheaper machine that makes it a viable option for many of our customers. All of the units that Boss takes for the UK will also be equipped with road lights, and on the Ausa machines these feature boxed in protection at the front and are sunken into the bodywork at the rear.” “Ausa don’t want to be a ‘me too’ company because then the only differential is price,” adds Country Manager UK & Ireland, Russell Perret, and it is true that there are subtle differences that contribute to improved performance. A counterweight on the rear of machines from 3 ½ tonnes improves traction, for example, but the new D601 AHG is the first to showcase the kind of design changes that will become common across the stable.

First shown at Intermat 2018 this 6-tonne capacity unit features a host of improvements, some of which are industry firsts. Traction is greatly enhanced by a limited-slip differential on both axles as standard, whilst the 55 kW Deutz 3.6 motor with DOC technology, eliminates the potentially higher costs of a particulate filter. Service access has been greatly improved, with access to hydraulic and engine oil from either side of the machine at ground level.

Modern machines are required to communicate with driver and fleet manager like never before, and a new easy-to-read dash reveals everything from hours of operation to speed and engine status at a glance. Moreover Ausa is promising that further advances in telematics on its new six and 10 tonne models will allow responsible persons to interrogate the performance of the machine and driver, eliminating costly service call outs through remote diagnosis or unsafe working practices from errant operators. There’s also separate driving modes; ECO Mode which automatically regulates the engine’s revolutions for greater efficiency and lower consumption. When the machine requires greater speed, Transport Mode is activated, allowing you to harness all of the available power to increase its speed during journeys.

A machine when fully heaped, especially in the six tonne or above weight classes, can present visibility issues, but with Ausa a
camera is now available on every machine from 2 ½ tonne and above, giving the driver a clear view of the ground level ahead both front and rear and providing an audible and visual warning of pedestrians. Aside from line of sight, concerns over a driver exposed to the vagaries of the elements, and potential hazards like a slewing excavator arm, has led to every manufacturer introducing cabbed variants. Ausa has thought very carefully about how the experience for the man or woman behind the controls can be improved and has deliberately avoided a cab that is also installed over the engine canopy, a concept that benefits from lower noise levels, whilst the interior is fully heated, with air conditioning as an option.

It’s not just about the machines themselves because all of the company’s processes have been overhauled across the board, including in parts. 94 per cent of spare parts are available on demand, and Ausa now processes 55,000 orders per year.

In addition, a significant advancement in the battle against downtime has been accrued with agreements with worldwide
leader suppliers with a global network of centres. The availability of spare parts also provides reassurance to the purchaser of second-hand machinery and increases residuals as a consequence.

The company reports that increased demand at home and abroad are motivating them to keep working hard and keep standing out for the robustness, reliability and design of its products. It’s clear that Ausa is determined to remain at the vary forefront of technological advances with new and innovative products that are going to be launched in the forthcoming months.