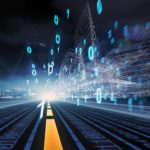 Eurovia Contracting, experts at delivering highways and infrastructure schemes, is paving the future using an array of new technology to increase safety, productivity and quality assurance on paving and surfacing contracts. A recent contract, renewing the road surface on the A505 Offley bypass near Hitchin in Hertfordshire, was used to trial their new process, equipment and material in real-world conditions.

The heart of Eurovia’s new process is the Automated Quality Assurance (AQA) service developed and provided by MATtest Southern, a material testing and consultancy business. Eurovia is trialling AQA which promises to deliver cost reductions, improved health and safety for the work crew and improvements in paving and compaction quality. AQA will also assist users in meeting BIM level 2 and beyond. The process manages digital data drawn from several sources and produces ‘automated construction summary’ reports in user friendly formats.

On the A505 site, where up to 600 metres of a single carriageway were renewed in a night shift, the AQA process pulled data from the asphalt paver, the BOMAG intelligent roller, the Tarmac asphalt plant, and the trucks delivering the hot rolled asphalt (HRA) to site enabling real-time performance updates whilst the work was progressing. MATtest also provided their App for measuring the spread-rate of pre-coated chippings.

MATtest Southern use their high-speed survey vehicle to check the surface quality and texture depth after surfacing. The team then have access to all the data and reports to assess and measure the renewal process from end to end. Digitisation is the process of converting information into a digital format. The result is the representation of an object, image, sound or document by generating a series of numbers that describe a discrete set of points or samples. In modern practice, the digitised data is in the form of binary numbers, which facilitate computer processing and other operations. Digitisation is of crucial importance to data processing, storage and transmission, because it allows all information to be carried with the same efficiency. Unlike analogue data, which typically suffers some loss of quality each time it is copied or transmitted, digital data can, in theory, be propagated indefinitely with no degradation whatsoever. In construction leading equipment manufacturers, like CAT, Komatsu and BOMAG, and specialists like Trimble, Leica and Topcon, have been promoting digitised 2D and 3D positioning systems for several years. With the advent of BIM (Building Information Modelling) the wider adoption of digitisation by contractors has started. There are huge benefits to be had from using the latest equipment and processes and many major projects, for example HS2, now call for Continuous Compaction Control (CCC). Eurovia is at the forefront of these trends which reaffirms their market leading position.

Road-speed Surveying, using one of MATtest’s vehicles, checks the road’s surface quality and the texture depth after surfacing and completes a grip test. The specially equipped vehicles can also record high-definition video of the surface. One of the advantages of this system is that traffic management isn’t required. The survey is conducted in regular traffic at road speed. The health and safety benefits of working in this way are also significant. Conventional testing is potentially hazardous and often conducted by lone workers. AQA takes workers away from potentially hazardous situations and places them in the safety of a survey vehicle.

When a contract is planned to use the AQA process the asphalt plant uses a ‘virtual ticket’ system. As a loaded truck leaves the weighbridge a virtual ticket is sent to the HDS server and Apex system. As soon as a load of material crosses the plant weighbridge, AQA is sent an electronic ticket equivalent to a conventional paper ticket. The data is also sent to the paver so that the gang can see the ticket information on eLoad, the materials management component of AQA. The asphalt paver is a critical piece of equipment in the process. It is equipped with a very accurate GNSS system, supplied by MATtest, which generates a ‘geo-fenced’ area around it which can sense other equipment and trucks on-site. The paver is also equipped with three accurate asphalt temperature sensors which continuously measure the temperature of the material as it passes through the hopper and screed.

With BOMAG’s BW174AP Asphalt Manager technology and MATtest’s UKAS-accredited laboratory experience, Eurovia was provided with compaction information for 100 per cent of the road that was laid. This proved to be a significant improvement on conventional testing, which gives a less complete picture. Eurovia is the latest in a growing list of leading contractors to adopt Continuous Compaction Control, CCC, a process designed to increase the productivity, repeatability and quality assurance of material compaction in civil engineering works. BOMAG CCC supports the simple 1-2-3 process of display, control and documentation.

Eurovia Contracting’s new BW174AP, was displayed at Hillhead in June. The machine is equipped with the manufacturer’s unique Asphalt Manager 2 intelligent compaction system, which measures the actual compaction under the machine in real-time and gives the operator a continuous display of compaction progress. The fully integrated system can also control and optimise the compaction process in automatic mode by constantly adjusting the compaction vibration amplitude to achieve the target value quickly, saving time and fuel. Eurovia’s machine is also equipped with a very accurate Moba GNSS location system and temperature measurement device which integrates the compaction data from the system and continuously streams the data to the AQA server using the ‘cloud’ to permanently store all the data.

The company can also supply its own full documentation system, the third element of CCC, in the shape of the BOMAG Compaction Management (BCM) system. Taking the form of a powerful tablet computer, with touch-screen control, the in-cab mounted device can be used to permanently record all the GNSS and compaction date. The BCM tablet computer has the advantage that it is easy to transfer from one machine to another. The recorded data can be easily transferred using a memory stick or an SMS data-transfer app. BCM Office, a powerful PC software package which allows a wide range of analysis and reporting options to assure quality assurance and the long-term secure storage of the data, is also available.