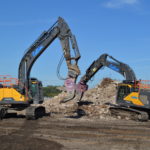 A pair of PRODEM pulverisers are helping making short work of the foundations of a once mighty power station. Construction Plant News visits the site to find out more.

If you want an indication of just what is the best equipment available on the market at any given time then visit a demolition job. In a highly unforgiving environment for machinery only the best in excavators and materials handling solutions need apply. That’s why Collins Group is the largest customer in the UK for Volvo Construction Equipment’s excavators, for example, and its expert team know just what it takes to get the most demanding of jobs done.

It is that company’s demolition division that’s been charged with clearing the site of the former Hams Hall power station ready for redevelopment, a project which has proven to be one of the most aggressive and relentless of its kind currently being undertaken in the whole country. With machinery in operation continuously six days a week, Collins has had to be equally discerning in its choice of attachment. “We simply couldn’t get the job done here without them,” declares Collins Site Manager, Carl Homer, when we ask him about the two PRODEM pulverisers on site. Carl has been particularly impressed with the durability and power to weight ratio of the units, on a site where the brief has been to reduce imports of material wherever practicable and reuse and recycle existing concrete into aggregate. The two crushers installed on site are producing 6F2, Type One and 6A Oversize, all of which is being subsequently re-laid by Collins Earthworks and it is the teeth of those pulverisers that is crushing the concrete whilst the blades are slicing through the rebar.

“The replaceable tooth system means downtime is limited and there’s a wider jaw and impressive closing force. We’ve been using them to break out and process the reinforced concrete from the foundations and, with a 125,000 cubic metres of concrete to get through, we need the most productive equipment we can source. This job will kill any attachment but we’ve been impressed with just how long PRODEM will keep going.”

There are two attachments in the distinctive purple of PRODEM chewing through the foundations of this 1920s edifice, a PHP320 Static Pulveriser with a maximum crushing force of 173 tonnes, and a rotating PHP350R with 224 tonnes of crushing force, each of which is attached to a Volvo EC 380E with an operating weight of 38 tonnes. The rotating model has a working weight of 2,950kg, and a maximum jaw opening of 1,056mm, and is suitable for excavators in the 28 – 40 tonne range.The unit has found favour in the market thanks to its interchangeable wear parts and subsequent reduction in downtime. Its hardened teeth are made with special materials for enhanced durability but, when they do inevitably succumb, it means that the attachment doesn’t have to be removed from site for replacement fitting or welded on site.

The Static PHP320 has a working weight of 2,745kg, max jaw opening of 1,049mm and a carrier weight of 28 – 42 tonnes. “When you’re working on large piles then a fixed head is all you need for productivity,” continues Carl, “but for more intricate tasks the rotating can be a formidable tool in the hands of an experienced operator and on a site like this one there’s inevitably a combination of both.”

“This is more a site clearance job, with 50 acres of remediation, and we’ve been dealing with ground contamination that ranges from asbestos to hydrocarbons and PFAs. Demolition is always full of surprises, and there are no detailed drawings available, so until you open up the ground you simply don’t know what’s there – it’s more like an archaeological industrial dig than a demo job.”

BPH Attachments is the sole UK importer for the PRODEM range. These are versatile piece of kit, capable of primary demolition, secondary concrete reduction and material processing. Other features designed to increase speed performance and crushing power include a trunnion type cylinder that maximises breaking force throughout the jaw closing motion as well as opening motion, and an integrated speed up valve. In addition, higher levels of productivity are achieved with a cracking tooth positioned on the outer end of the jaw.