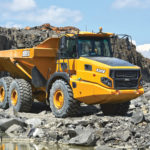 If you were asked to identify a class of machinery that is set to capitalise on the future largesse of HS2 then you would probably conclude it would be the articulated dump truck. With an estimated 128 million cubic metres of excavated material to shift the project is expected at its peak to employ well over 400 individual units, promoting the UK to the enviable position of the largest single market for ADTs in Europe.

If you were then to consider an individual manufacturer that is best placed to benefit, then the company with the widest range and the largest individual model in the world would feature pretty highly on the list – and that’s exactly what Bell Equipment can boast. Moreover, a company with effectively only two product categories – the ADT and the wheel loader – can hone its skills and lead those market sectors with new innovations. The most recent addition to that comprehensive line-up is the 20 tonne payload B20E, a unit developed in conjunction with Bell Equipment’s biggest customer in this country, AB2000 as MD, Nick Learoyd explains. “In that machine size there is really only one other manufacturer producing a solution, but the market is bigger than you might think. The smaller footprint lends itself to housebuilding and civil engineering projects, for instance, which have both seen increases recently.”

Crucially, the B20E retains all of the safety features you would expect on a larger truck, such as an inclinometer, on board weighing, and the same ROPS/FOPS cab as its larger siblings, and the manufacturer reports that it is a concept that the market has warmly welcomed. “We’re selling as many of these as we can get our hands on,” continues Nick, “because many of our customers see it as an addition to their portfolio, just as it is an addition to ours.”

Indeed, Bell prides itself on being able to tick more boxes than any other manufacturer. Where others may still be playing catch up, the aforementioned inclinometer has been a feature on its trucks since 2009, for instance, and can be found on every single unit the company makes. Similarly, its integrated Fleetmatic telematics system has been refined over many years of usage. That system also incorporates geo-fencing, where the machine can be set to a certain speed in a specific area.

Moreover, the Bell units can track what material is being carried and where it is going to be tipped, information which can be accessed remotely by site managers, a feature that will gain crucial importance on a project like HS2, where keeping us much of the excavated material on site is a key ambition. These are all features that the government’s flagship infrastructure project will demand, providing an appetite amongst plant hirers and contractors to refresh their fleets, which Bell stands ready to satisfy. Although Bell’s origins are in South Africa, everything up to the B60E is now manufactured for the European market in Eisenach, Germany. This is the largest machine in the range and, along with the B20E, the newest. Despite its size the smallest turning circle on the market lends itself to more confined dig and tip areas, whilst long haul capabilities should also see it shouldering a vital role at HS2. The B60E is, in fact, the biggest ADT in the world, but it’s not just its size that singles it out amongst its contemporaries. Whereas the competition has three axles on trucks of a comparable size, Bell makes use of two. Equally, the bin has been designed as a wider target to hit for the very large excavator, and very large bucket, that typically would be feeding it. With the extension of the range at either end of the spectrum, market share should increase in parallel, but the volume machine in ADTs remains those weighing in at 30 tonnes. Whatever the size, the design philosophy ever since the business first began trading has been simple – to build an articulated dump truck that is as strong and as light as possible. The name of the game, of course, is cost per tonne of material moved and, with what is described as class leading payload-to-weight ratio, end users will see benefits in fuel costs not just in the B30E but across the stable of products. This is also an ethos which extends to the components used, with all machines equipped with Mercedes engines, and Allison transmissions.

“The technology on our machines is world leading,” declares Sales, Marketing and Dealer Manager, Nic Grout. “On board weighing has been standard since 2003, whilst our diagnostic and fault finding systems are all designed to reduce downtime. Both the operator and the engineer can benefit from all the information they need, whilst fleet managers can see exactly what their drivers are doing on site. All of that adds up to a compelling proposition for the hirer and contractor.”

Bell Equipment was, in fact, founded in 1954 by the eponymous Irvine, and the business has been driven forward since by his three sons, with Gary now serving as company chairman. Irvine Bell’s first product was a cane hauler, a solution they still manufacture in South Africa in large numbers, and the first ADT, the B25A, would roll from the production line in 1984. Today, the E-range continues to ensure that being as sound as a Bell, is a phrase that certainly extends to the articulated dump truck.