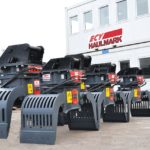 2018 has already proven to be a significant year for ECY Haulmark, and the company which supplies equipment used to demolish everything from retired jumbo jets to football stadiums is eyeing record revenues as it expands its product range and targets new sectors. A £1m refinancing deal and ambitions to increase annual turnover from £10m to a record £12m over the next two years is the target for the Warrington-based business, with new equipment and two new delivery trucks already in place. The attachments it sells and rents out are mainly used to demolish concrete buildings and structures, but have also been used in projects to dismantle end-of-line jumbo jets, oil refineries, power stations and factories. Recently it has supplied attachments used to demolish Tottenham Hotspur FC’s White Hart Lane stadium, as well as disused offshore pipelines and installations.

Accountancy firm HURST is advising the company on its expansion strategy. Tim Potter, chief executive of HURST, said: “It’s great to see ECY Haulmark continuing to prosper. The company has taken some major steps forward in recent months and we look forward to working with the management team to fulfil their strategy.”

The company’s roots trace back to 1961 when brothers Colin and Eric Yarwood established ECY Holdings. The business acquired Haulmark Equipment in 1995 and ownership has since passed to cousins Richard and Philip Yarwood, sons of Colin and Eric respectively.

The business currently employs 37 staff and is recruiting and  also operates a division which supplies and installs security barriers and fencing at locations such as car parks, airports and retail parks.

Richard said: “The refinancing arrangement has provided us with welcome additional facilities to grow the business. We’ve invested in more attachments for the hire fleet to increase our stock offering by 25 per cent, and we have also invested in two new 20-tonne delivery wagons.

“We are operating in a competitive market so we have to be able to provide what customers want, when they need it, while ensuring our products are of the highest quality. We see strong growth potential for the business over the coming years as we look to expand into other exciting and emerging markets.” One company for which ECY Haulmark is doing just that is Collins Group. Midlands based contractors Collins Demolition has acquired two Volvo EC700 excavators to add to their impressive fleet of machinery, both of which came equipped with the OilQuick automatic quick coupler system for ease of attachment changeover. The machines were recently working at their Hams Hall site in Birmingham.

The site is home to the former Hams Hall power station, a structure built in the 1920s on the site of Hams Hall. It was completed in three stages; 1927-9, 1949 and 1958 and once boasted 13 cooling towers, with the complex containing some interesting early power generating machinery. Today, Collins Demolition and earthworks has the contract to complete the ground remediation.

A wide variety hydraulic attachments are available for utilisation on the site for both of the Volvo EC700 machines, both of which have had the OilQuick OQ90 quick coupler and attachment brackets installed by ECY Haulmark. The attachments in use on the site include a 3.8 ton VTN MD610 selector grab and an 8.7 tonne VTN FP70 rotating concrete processor, also supplied by ECY Haulmark, as well as a variety of hydraulic breakers and buckets.

Collins Demolition Director Scott Craddock commented: “The two machines have been a brilliant addition to the demolition fleet”, “having OilQuick fitted to the excavators improves health and safety for our operators and site personnel, machine productivity is increased and downtime suffered by operators having to make manual attachment has now become a thing of the past”. He continued: “I will definitely be looking into to converting the remainder of the demolition fleet to OilQuick in the future”.