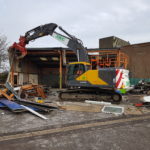 Historically our means of production has been has been set upon a linear path of make, use and dispose, but with waste now viewed as a valuable commodity in its own right company’s like SRC Aggregates have seen the benefit of what has become known as the circular economy.

If you are in command of as much of the process as possible then you are in control of your costs, and ultimately your own destiny, and that is the SRC ambition – what’s more they are a company with the infrastructure in place to do it. Today, this family run firm operates four quarries, two of which also act as waste recycling centres, a further recycling depot in east London, and a demolition contracts business, with the latter making use of some of the industry’s most advanced equipment.

The two excavators working on the company’s demolitions projects – a 25 tonne Volvo EC250 and a 30 tonne, Volvo EC300 – are each equipped with Lehnhoff’s quick couplers, for instance, and SRC Head of Contracts, Craig Chaplin is enthusiastic about the benefits. “We started the contracts division of SRC in 2015 and I wanted the Lehnhoff system on our machines even before we had a job to go,” he explains. “With an attachment change in just 15 seconds, instead of having two machines on site – one with a breaker and one with a bucket, for instance – one machine can fulfil both those functions just as efficiently.” Impressed by the dedication that the Worsley Plant team has shown to a loyal customer in back-up and service, SRC have made a number of other purchases from the attachments supplier, including Lehnhoff buckets, two Lehnhoff grabs, and a Rotar shear and pulveriser. “With the equipment we’ve bought the quality of the build ensures that you don’t encounter problems very often but I’ve know the guys at Worsley Plant and I knew that if there was a problem I could pick the phone up and it would be sorted. We just can’t afford downtime, so that combination of reliability and availability sealed the deal. Not only that, but if I need something bespoke for a particular job, Worsley will source it. We’ve hired from them as well – Remu crushers and screeners, for instance, on sites where space is at a premium and it’s not possible to bring in a static crusher.”

It’s not just about the machines, however, because a happy operator is a more productive one, and that’s what the Lehnhoff provides. “If the driver can avoid getting out of the cab to change hoses, in all weathers and with other moving plant around the site as a potential hazard, then that’s all the better for them,” adds SRC’s demolition expert. “Not only that but, because it’s so easy to change between attachments, it means that they’re more likely to use the right tool for the right job, reducing wear and tear and damage to equipment.”

Every construction plant fleet manager knows the story. An operator has a shear on and, rather than changing to a pulveriser, chooses to nibble away at a section of concrete with their existing attachment. Repeat that misuse over the lifetime of the equipment and the inevitable result is unnecessary repairs. “In the two years we’ve owned the Rotar Shear and Pulveriser they’ve done a considerable amount of work and we’ve yet to replace any wear parts,” Craig enthuses. “That’s a testament to the quality of those attachments themselves, but also to the fact that they’re being properly used on site. I’ve experienced problems with rotational pumps, rams and seals, on cheaper equipment, and you could be replacing a set of pulveriser teeth every six weeks, but there’s none of that with Rotar.” SRC Aggregates is a company that likes to do things properly itself. Formed in 1994 by David and Donald Reece as Sewells Reservoir Construction, the expansion into construction materials supply would begin in earnest with the development of Crown Quarry, at Ardleigh, near Colchester in 2009. Highwood in Great Dunmow would follow in 2011, with wash plants installed at both sites, but the expansion didn’t stop there. Today, the list of services beyond aggregate supply is diverse including, demolition, remediation, site clearance, ready mix and much more.

“The objective was to provide a complete package where one division can feed and sustain others,” explains SRC Aggregates Ollie Reece who, with his cousin Louise Yates is now at the helm. “We can demolish a structure and then either recycle that material on site or transport to Highwood or Crown, thereby by producing recycled aggregate which can be put back into the market. Moreover, when the two Volvo excavators are not on demolition duty they can then brought in here to process material for the crushers.”

All of the company’s quarries are sand and gravel sites, but will also produce recycled aggregates, 10, 20, & 40mm ballast, as well dry recycled produce such as 6F5, 6F2, 6F1 and Type 1, 2 and 3, and its various divisions now turns over in excess of £42 million a year – and the right choice of machinery is integral to that success.

Continues Ollie: “As a nation, resources are becoming ever more scarce so our way of doing things, ensuring we recycle and reuse and then feed it back to the industry, are good for the environment but also good for business. By controlling as many of the processes as possible we are master of our own destiny.”

“I’ve been over to the Lehnhoff factory and the attention to detail and engineering prowess is immediately apparent,” concludes Craig. “Ours is a fast moving business and we need equipment that will perform quickly and reliably.