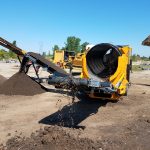 Crushers and screeners are a perfect marriage and Red Knight 6 supplies some of the best of both worlds.

The case for processing and recycling construction waste into a profitable commodity is now well proven, and is indeed a development driven by swathes of legislation designed to reduce landfill.

For the contractor, what that leaves is the choice of machinery, and if a plant manager were to turn to one Surrey-based outfit then they would have access to two premium brands in both crushing and screening.

Founded four years ago by Paul Donnelly, Red Knight 6 (RK6) is now the dealer in the South, Midlands and Wales for Anaconda International range of screeners, whilst they also supply crushers from the Austrian-made Rubble Master across the same territory.

For more articles on crushing and screening click here, here and here.

Anaconda International emanates from that great hotbed of this class of machinery in Northern Ireland, and its County Tyrone hub is where they made the leap beyond the static solution.

Anaconda looked at the challenges that add costs to a machine and sought to eliminate them. Amongst these is transportation, which is why the DF410 was designed so that it can be folded up and shipped in a standard 40 ft. container anywhere in the world. Despite its relatively compact dimensions the same unit is also equipped with the longest screen box in the segment.

Essentially what any contractor wants in the modern world is more from less – a powerful and efficient performance from smaller machinery and that’s what the DF410 can provide, carrying out highly effective screening operations in spaces that would not be accessible to larger machinery.

Weighing in at just 15.6 tonnes, the scalping screener is equipped with variable speed belts and a high energy screen box. All belts fold hydraulically and the machine has a fixed screen angle of 15 degrees. There are the options of either JCB or Deutz engines and can come equipped with either Bofar Bars, Finger Screens, Punch Plate or Wire Mesh. A radio remote control is also available.

When it was launched in 2006, the DF410 introduced the concept of compact screening to the industry and since then the product range has evolved into larger units, as well as tracked and wheeled trommel screens and drum screens.

Where Anaconda specialises in screening Rubble Master’s expertise is on impact crushing, a technology which this Austrian manufacturer has been perfecting for more than 26 years. The impactor was thus far not a concept that had penetrated the UK market in great depth, however that was until RK6 took on the brand, and for Paul Donnelly it is still a matter of education.

“A jaw crusher might crush stones down but an impactor will add value to that material by achieving a consistent size and shape,” declares the Red Knight 6 founder, but there are other significant advantages. Rubble Master are the pioneers of building and designing Impact crushers and today lead the global market in this sector. Donnelly believes this is clear as now all others are trying to emulate what Rubble Master have done.

“In this country impactors have previously been selected for the wrong applications,” continues Paul, “and that has concerned the customer with high wear. At the same time, and where it really scores points is in Rubble Master technology’s versatility in the material it will process.” He confidently states ‘you cannot design in 12 months what Rubble Master have perfected in 26 years and indeed continue to strive ahead in their ideas’.

The rise of certification also plays well with the impactor. Today, recycled aggregates must conform to BS/EN Standards or the Specification for Highways Works (SHW), as Paul explains: “You can’t just feed brick, concrete and mortar through a jaw crusher and make a rough 6F2 anymore.

“For utilities work, for instance, material needs to be shaped so it doesn’t pierce pipes or cables and that’s what the Rubble Master range will give you. It’s all about a better, more uniform and marketable finished product.”

Rubble Master has grown its range from the compact RM60 up to the tracked RM70GO!2.0, and now has five machines in the portfolio, including the most recently launched RM120GO, a machine that weighs only 35 tonnes but can achieve an output of 350 t/h.

Concrete, asphalt, rubble, glass and natural rock are some of the materials that will feed the Rubble Master range insatiable appetite, whilst the units are designed so that the impact plates can be exchanged quickly, which means they can be easily set up for either natural stone or recycling applications.

“The developments that have been made in engines and torque means you can achieve much more with the Rubble Master size of machine – you no longer need a 30 tonne machine to achieve 200t/h because you can do the same job with a 23.5 tonne RM90GO!2.0,” concludes Paul.

0 0 0 0
Previous : Big Investments on Track
Next : Roadmender: Could Recycled Asphalt Save the Industry Money?