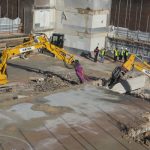 Basingstoke remains one of the most bustling commuter towns in the south east and, like many fixed in the orbit of the capital, is indebted to new town planners for many of its original structures. The Festival Place Car Park in the town centre is one such edifice, but has in the intervening years fallen victim to ‘concrete cancer’ and is subsequently beyond repair. As a result, Erith Group has been called in by the main contractor Oakmont Construction to take the building down.

This would, however, prove to be a particularly challenging site, which required some unique solutions. Whilst scaffolding and preparation work began two weeks prior, the actual demolition phase was scheduled for just five weeks, and such a relatively brief project length was only possible thanks to the expertise and experience at Erith, armed with two Komatsu excavators specially adapted for the purpose by Mutley Plant Services.

In that time the demolition contractor will achieve the prodigious task of removing three levels of the multi-storey but, given that the car park is effectively divided in half, that will actually represent six separate storeys.

Still a relatively simple procedure for the UK’s largest demolition contractor, you would assume, but first consider that the Festival Car Park straddles a four lane dual carriageway, which would remain open throughout the build, whilst the adjoining car park that still services the town centre’s largest shopping centre would also remain live.

Not only that but the site is surrounded on two sides by residential tower blocks, which had significant implications for permissible noise and dust levels, whilst the precast concrete floors would only allow five tonnes of load. “In total we’re demolishing nearly 6,000 tonnes of concrete and removing it, so the biggest challenge for us was getting the material out,” explains Erith Operations Director, James Hollands.

The original method statement called for five tonne excavators armed with hydraulic breakers but, given the proximity of so many domestic dwellings, this is not a proposition that would have endeared the contractor to local residents.

Not only that but moving the material to the lower floors using skid steers would also have been a time consuming procedure with the inherent danger of plant and vehicles constantly moving around the site.

The solution was to design a prop system that would raise the allowable floor load from 5 to 17 tonnes, making two Komatsu excavators then fit for the task of taking down the concrete and rebar.

Where it gets really interesting is the well holes cut by diamond drillers through the lowest floor of the car park to enable concrete to be dropped to waiting eight wheel tippers below – but the innovations don’t stop there.

Rather than running skid steers right around the car park along the route of the original roadways to be stockpiled on the level at which the well hole opening was to be found, Erith created a series of concrete chutes in a ‘helter skelter’ configuration directly down through the multi storey car park floors.

Material was transferred down these chutes to an awaiting Cat 226B skid steer, which managed the stockpile, taking care to ensure that it did not exceed the load limit of the floor and, in communication with the banksmen and tipper driver below, fed the concrete rubble through the 1 ½ metre well hole. With this method it can take just 15 minutes to fully load a tipper, with minimal movement of plant and complete segregation from the live dual carriageway.

One of the real stars of the show, however, would be found at the coalface of this demolition project and that’s a specially modified 13-tonne Komatsu PC 138US. This machine, adapted specifically for the Basingstoke job, is equipped with a Kingshoffer MQP processer that would normally be fitted to a 25 tonne machine. Thanks to the experts in excavator adaptation at Mutley Plant Services in Kent, however, it is successfully bringing down concrete and rebar on a unit nearly half that size. “Even with the props we had in place we needed to get the weight right down so we’ve shortened the dipper arm, and removed the blades,” continues James.

“Having a reduced dipper length also changes the geometry of the machine, which means it can accommodate an attachment of that size whilst remaining stable in operation. I can confidently say that using the Komatsus has probably saved five weeks off the demolition schedule. If we had used smaller machines with breakers we could well have been here for months.”

The second Komatsu is equipped with a ProDem Shear in order to chop the rebar up into smaller pieces so that it can be removed on trolleys, whilst both feature additional protection supplied from the factory. That includes heavy duty undercovers, side guards and attachment cylinder guards, with the Japanese manufacturer’s own Special Demolition Safety SpaceCab also in evidence. Add to that an additional camera to improve visibility, together with high impact glass, and this is a machine that is ideally suited to one of the most unforgiving environments for plant.

“Komatsu’s machines are some of the only excavators on the market that can be relied upon in a demolition environment,” concludes James. “Not only are they built for a war zone but the service and back up is very good.”