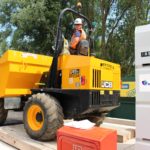 July marked a record increase in activity for the UK construction industry according to the IHS Markit purchasing managers’ index, with a growing number of clients committing to house building and commercial projects following a slowdown in the first quarter of 2018. While this recovery is more than welcome, the Builders Merchants Federation (BMF) has warned that the introduction of clean air zones in cities such as Birmingham may stall this growth mid-boom.

In preparation for the introduction of clean air zones in 2020, construction companies are considering alternative ways to reduce emissions ahead of time to avoid encountering issues with accessing city sites, winning tenders and risking fines for non-compliance. While a low emission future cannot be achieved overnight, there are a number of steps that businesses can take to minimise their impact on local air quality.

As well as employing these vital measures, construction companies such as J Murphy and Sons, Morgan Sindall and Jackson Civil Engineering have taken an additional step to improve local air quality through the use of cleaner burning alternative fuels in plant machinery and generators.

So how do alternative fuels immediately lower emissions and what environmental benefits can they offer construction companies looking to improve the sustainability of their operations? An alternative way to lower emissions

The construction sector has limited alternatives to diesel to power its heavy duty engines. The use of paraffinic gas-to-liquid (GTL) fuels such as Shell GTL Fuel can support businesses to meet emissions targets immediately as part of their journey to zero emissions.

Rather than being derived from crude oil, GTL products such as Shell GTL Fuel are created from natural gas using the Fischer-Tropsch manufacturing process. The Fischer-Tropsch process produces more consistent and uniform molecules compared to conventional crude oil refining. This means that the fuel has more efficient combustion properties inside standard diesel engines, resulting in lower emissions of pollutants such as NOx and PM.

As well as its ability to reduce emissions, Shell GTL Fuel offers a number of additional performance benefits. The fuel’s more uniform combustion can help to reduce engine noise with reductions of between 3-5dB reported by some customers – a significant benefit when working in noisy city centres or suburban communities.

With a similar molecular composition to diesel, Shell GTL Fuel can be used as its direct replacement and drop-in solution, meaning no modifications to existing engines or investment in new machinery is required. Jackson Civil Engineering recently took its first delivery of Shell GTL Fuel to use on a large flood management scheme which it is building for the Environment Agency, Birmingham City Council and Sandwell Council.

The Perry Barr and Witton scheme, which aims to protect approximately 1,400 properties at risk from flooding by the River Tame, is the first construction site in Birmingham to trial Shell GTL. Jackson Civil Engineering will increase the flood storage in the Forge Mill area upstream of Perry Barr and Witton by building new embankments, a flood wall and installing a control structure.

As the scheme is located close to a nature reserve, Jackson Civil Engineering opted to use Shell GTL Fuel in their construction equipment to reduce emissions of harmful pollutants such as NOx and PM, and therefore deliver immediate improvements to local air quality. Shell GTL Fuel is also classified as non-toxic and readily biodegradable, which means it disperses naturally within weeks in the very unusual case of a spill – a huge advantage when working near natural ecosystems.

The fuel is also free of unwanted components such as sulphur, metals, and aromatics, which helps to minimise its impact on the environment compared to conventional diesel. It produces less odour, smoke and engine noise – creating a healthier working environment for workers and reducing disruption to the local community.

Despite the multiple benefits of alternative fuels, such as lowering emissions, improved handling and increased productivity on site, uptake amongst construction companies is still at an early stage.

Perceived cost is the biggest point of resistance when it comes to considering alternative fuels such as hydrotreated vegetable oil (HVO), biomass-to-liquid (BTL) and GTL. While paraffinic fuels may cost slightly more than conventional diesel, they are still cheaper than introducing green technologies like catalytic converters and upgrading entire fleets or infrastructure that may be obsolete in a few years.

Another barrier is that existing emission limits, such as the Non-Road Mobile Machinery (NRMM) guidelines that were introduced in 2015, are not being strictly enforced. As a result, there is a limited sense of urgency for construction businesses to seek out cleaner and more environmentally friendly solutions unless it’s part of a wider corporate commitment to being a market leader when it comes to sustainable ways of working.

The introduction of incentives for using cleaner, alternative fuels would go some way to encouraging clients, contractors and suppliers to change their behaviours. There’s also an element of ‘Chinese whispers’ involved due to a lack of understanding around alternative fuels. In one case, a potential customer had heard it would be cheaper to invest in new plant machinery rather than switching fuels, which just isn’t the case.

A cleaner fuel for cleaner air

As the exclusive supplier of Shell GTL Fuel in the UK, we’re working with our construction customers to support them in adopting alternative fuels to make a positive contribution to the UK’s air quality problem. As well as tackling poor air quality, alternative fuels can also deliver improvements to the health and wellbeing of the workforce and the communities impacted by construction works. By making smart, informed fuel choices, we can build a cleaner, safer, healthier future for us all.

0 0 0 0
Previous : JLG: City Slickers
Next : Atlas Copco and REACTEC Team Up with Harringtons to Ensure Safe HAV Levels