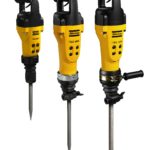 Harringtons Builders Plc, a well-established groundworks contractor company focusing on commercial, industrial and residential projects in the UK, have been measuring the vibration levels of their tools, including TEX 09 PE pneumatic hammers recently purchased from Atlas Copco, using technology from REACTEC called HAVWEAR.

The device measures and records hand-arm vibration levels, alerting the user to overexposure, and as a result preventing against the possibility of White Finger. Atlas Copco tools are designed with a focus in reducing the vibration levels, making the equipment safer for the end user.

Hand Arm Vibration Syndrome (HAVS), commonly known as White Finger, is caused by exposure to vibration. Working regularly with handheld power tools, there is an increased risk of damage to nerves, blood vessels and joints of the hand, wrist and arm due to the vibration of the tools. Damage such as this can lead to HAVS, with symptoms including numbness in the fingers, inability to feel with fingers, loss of strength in hands, and bad circulation causing pain in fingers. Extreme cases could lead to multiple fingers being permanently affected.

Due to these risks, it is important to take precautionary actions when working with handheld tools. Scott Carr, Health and Safety Manager at Harringtons Builders Plc, explained that part of the issue he had when considering the risk of hand-arm vibration levels was the lack of recorded vibration ratings for the tools they were using, as they were fairly old. This, he concluded, meant that they posed a danger to the operator, as the vibration levels could not be measured properly. This lead to a purchase of multiple Atlas Copco handheld tools, namely TEX 09 PE hammers, as new equipment ensured more reliability due to the condition and quality of the tools, as well as providing vibration ratings.

TEX 09 PE pneumatic hammers are designed with multiple features to make them easier and safer to use. The effective silencer helps the hammer to meet the European noise emission directive, making the tool noise level safer, and the screw cap retainer provides comfortable grip. Most notably, HAPS (Hand and Arm Protection System) vibro-reduction means that workers can use the tool for longer, without reaching harmful vibration levels.

TEX 09 PE hammers have a vibration level of 4.2 m/s². This gives a maximum exposure time of around 120 minutes. For a tool with a vibration level of 5.2 m/s², only 1 m/s² higher than the TEX 09 PE, the maximum exposure level drops by a significant 60 minutes. Using HAPS enabled machines such as the TEX 09 PE allows operators to work for longer, as well as enabling a safer work environment, better profitability and projects finished on time.

Harringtons Builders Plc informed us that they had been using some new technology alongside their new TEX 09 PEs: HAVWEAR, from REACTEC, measures the vibration levels of a tool as it is used, and records the data. The HAVWEAR device is signed out by an employee, connected to an electronic tag loaded with data on the tool, then worn as a watch whilst the employee uses the tool. Once the work is done the device is plugged into the modem, which then sends all the recorded data straight to Scott’s laptop.

HAVWEAR monitors the vibration levels transferred from machine to worker. An alert is triggered when it detects that the optimum exposure level has been reached, prompting the operator to stop. If the operator continues to use the tool, consequently overexposing themselves, HAVWEAR will record this, and Scott will receive this data.

The data gathered from the past 3 months at Harringtons Builders Plc indicated that only seven people had overexposed whilst working, and only one of those had overexposed by more than 10%. Scott was able to act on these results quickly and efficiently, communicating with the employees who had been overexposed – there has since been no overexposure of these individuals.

Overall, Scott believes that HAVWEAR has improved health and safety measures at Harringtons Builders Plc. Using the data collected from HAVWEAR, he is able to assess correct usage of the machines, follow up with potentially dangerous overexposures quickly and efficiently, as well as having concrete, reliable data for the company health and safety records. Scott Carr noted another advantage that HAVWEAR provides; “The simplistic benefit of this technology is that the employees know that something is being monitored, they see a real input into their safety.”