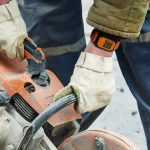 Speedy Hire: Not So Good Vibrations

What can you do to mitigate the effect of Hand Arm Vibration Syndrome (HAVS)? Speedy Hire has some answers.

In 1911, Professor Giovanni Loriga, a doctor specialising in occupational health, noticed something: workers who repeatedly used pneumatic hammers ended up with damaged hands. Showing true dedication to his research, he even used these hammers himself repeatedly, and noticed that he ended up with the same symptoms. Clearly, there was some sort of causal link between hammer use and hand damage.

The true nature of this link was not firmly established until 1918, when Alice Hamilton MD – who would later become the first woman to be appointed to the faculty at Harvard Medical School – carried out a study of the symptoms experienced by quarry cutters and carvers in Bedford, Indiana. There, she noticed that: “Among men who use the air hammer for cutting stone there appears very commonly a disturbance in the circulation of the hands which consists of spasmodic contraction of the blood vessels of certain fingers, making them blanched, shrunken, and numb.” She rightly identified that it was the vibrations that were the culprit in this new condition she had observed – which she christened ‘dead fingers syndrome’. She also noticed that cold weather and continuous use of the air hammer led to an increase in symptoms and wrote that “if these features can be eliminated, the trouble can be decidedly lessened.”

Despite the fact that the risks were identified at the close of the First World War, the first scale for assessing the condition we now call Hand Arm Vibration Syndrome (HAVS), the Taylor-Pelmear scale, was not developed until 1975. And in the UK, it was not listed as a prescribed disease until 1985.

The symptoms of HAVS, and its close relations Vibration White Finger, Carpal Tunnel Syndrome and Raynaud’s Disease, are unmistakable: tingling and numbness in the fingers, loss of strength in the hands and, in cold and wet weather, fingers going white, then red and becoming painful can all manifest as a result of the damage done to the nerves, blood vessels and the joints of the hand caused by using vibrating machinery.

And even what seems like a small amount of exposure is a risk if it happens on a regular basis. Using hammer action tools for just 15 minutes per day, for example, can leave workers with the condition.

For this reason, employers needs to carefully risk assess their working practices for HAVS-risk and put a plan in place in order to ensure their workers are not exposed.

It is not just the equipment used that causes HAVS, however. The interaction of other factors also plays a part. For example, whether a tight or loose grip is used, the temperature and the rest times in between exposure can all increase or decrease risks. More personal factors, such as whether the worker’s circulation is compromised by factors such as smoking also play a part. The good news, however, is that the risks are easily mitigated by taking the following steps: