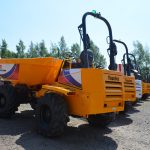 If you’re looking for a construction plant manufacturing success story on these shores then look no further than Thwaites. Construction Plant News pays a visit to the manufacturer’s West Midlands production facility. There are some manufacturers who might proudly proclaim they are flying the flag for British manufacturing when in reality their production facilities are little more than assembly lines – where components are sourced, often from the four corners of the globe, and packaged into a whole. Not so with Thwaites, where the sounds and smells of the cutting, hammering and welding of an engineering workshop betrays a company that is full in command of as much of the process of making its product as is feasible.

From lengths of sheet steel to finished site dumpers, the Leomington Spa-based firm has been the expert in this muck shifting solution for over eight decades, having celebrated its 80th birthday just last year. In fact, Thwaites prides itself on being in full command of as much of the process as possible, which also means that it is ideally placed to provide just what its customer want without resorting to post-production modifications by third parties. Thwaites might have a long tradition of manufacturing but that’s not to say that the company has not moved with the times. In our visit to a factory that spans some sixty acres, technologies which are quite literally cutting edge are in evidence, including the latest plasma cutters and robotic welders. “Raw materials are expensive and, whilst we have no influence over how much they cost, we can ensure that we are full utilising them,” explains Thwaites MD, Ian Brown. “That’s why our digitally controlled laser cutters are designed to extract the maximum amount possible from sheet steel, and any wastage is then recycled.”

This kind of innovation doesn’t come cheap, of course, and last year Thwaites made a £1 million investment in machinery, including a Trumpf Fibre Laser – the TruLaser 3030. It can cut steel of up to 20mm thickness and, thanks to smooth cutting edges, there’s no need for any deburring. Also new to the factory, an IGM P2W- 20 automated welding machine can automatically weld over 100 separate components using a 6 axis robot arm.

Thwaites actually introduced robot welding more than 12 years ago, but with some of the more intricate welds that a dumper’s skip requires, the skilled hands of expert and experienced workers are required. A 6 tonne dumper, which still represents the market’s volume product, takes around 15 man hours to assemble and the whole process, including hand painting, is in-house. Once the chassis is complete the unit moves to assembly, where one operative is then charged with the responsibility of building the machine from a trolley of pre-picked parts. The testing of components is carried out at every stage, before the finished dumper is given its PDI or Pre-despatch Inspection. As the money Thwaites has spent on its production lines can testify, building dumpers that have become synonymous with the very best in this machine class is about much more than just metal bashing, but it’s not just in the making of its products in which the company has been at the forefront of new developments. Rarely for a modern manufacturer, Thwaites are a specialist in what they do, largely resisting the urge to diversify into other areas throughout their long history. What that offers is a unique level of expertise in a category of construction plant that has been under significant scrutiny of late. In order to address issues around visibility and operator comfort, site dumpers have recently been subject to additions and redesigns. In the interests of the welfare of their workers, some construction companies have taken the view that the practice of leaving the driver exposed to the elements should now be behind us, for instance, but what might surprise some is that Thwaites has actually been making cabbed units for 25 years, with its latest option now available on the 9-tonne forward tip, 6-tonne forward tip and 6-tonne powerswivel dumpers.

At the time of our visit, a 9-tonne example was being proudly displayed at the entrance to the Thwaites head office. “This is not just a unit with a cab added,” continues Ian Brown. “The entire upper section has been redesigned to accommodate the Level 2 ROPS and FOPS structure.” Not only that but the addition of a camera system affords the individual at the controls with complete 360º vision, and again cameras are an option that Thwaites has been providing to its customers for many years. Often it’s the detail in the design that can make a big difference, with features like three steps up to the cab and not two, with grab rails providing three points of contact, making for safer access, whilst end users can now also benefit from a heating and ventilation system. Although the cabbed models still promise to be a very small part of overall sales, it is an example of providing what some customers have asked for and that is certainly one reason for this company’s continued success.

Of course, that’s not the only reason, because the Warwickshire firm has built a reputation for supplying a robust and simple solution to muck shifting on site, and with the housebuilding sector in particular currently experiencing considerable growth there is strong demand for the company’s products. It was in October 1937 that the story began with eponymous founder, Basil Thwaites setting up what was originally an agricultural engineering company, with the first dumpers following in the ‘40s. Fast forward to 2018 and the humble site dumper is still yet to be surpassed as a construction industry solution.