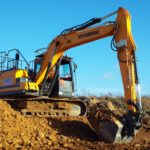 Taylor Lindsey is an award-winning property development and construction company based in the historic City of Lincoln. Established in 1945, the company has some of the best located and most prominent development sites in the area. The business has designed and built commercial properties for a wide range of local, regional and national companies.

Managing Director James Taylor said, “We specialise in well-built, traditional homes on some of the best located sites in Lincoln and the surrounding areas, and we have been building new homes for over 70-years.”

To assist the company with its extensive development programme is a fleet of 60 construction machines – the company’s latest investment is a 14-tonne HX140L, which was purchased through Hyundai dealer Willowbrook Plant, based in Corby, Northamptonshire.

Willowbrook Plant Sales Manager, Martin Lewis commented on the deal he said, “Taylor Lindsey has run competitor’s machines for several decades. They were looking for a new 14-tonne machine to upgrade its existing fleet- and after involving numerous manufacturers machines during demonstrations – they made the commercial decision purchase the Hyundai HX140 machine through Willowbrook.”

Martin added, “This machine has now been working on site for a number of weeks and the feedback from the operator is very positive.”

“It was the specification and performance of the HX140L which lead us to buy the machine,” reported James. “These were the main reasons for choosing Hyundai over other brands we demonstrations of. I particularly liked the push button start and the layout of the cab, which is designed and built for comfort. The machine is also simple to operate and has excellent safety features. The weight to power ratio is also very good and it’s very fuel efficient.”

James added, “The operators have also given the Hyundai machine the thumbs up and have praised its performance and operator comfort.”

“We have worked with Willowbrook Plant in the past and have bought other machines from the company – we find that they offer a very good service and provide prompt attention. Based on the performance of the HX140L – we will be buying more Hyundai machines in the future.” Concluded James.

The HX140L also features IPC (Intelligent Power Control) computer-aided power optimisation based on load demand, and Eco Breaker mode for selectable pump flow and improved fuel consumption, when working with Hyundai hydraulic breakers and many other attachments. The combination of faster cycle times and more power result in productivity increases of up to five percent.