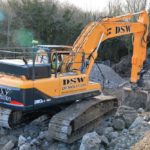 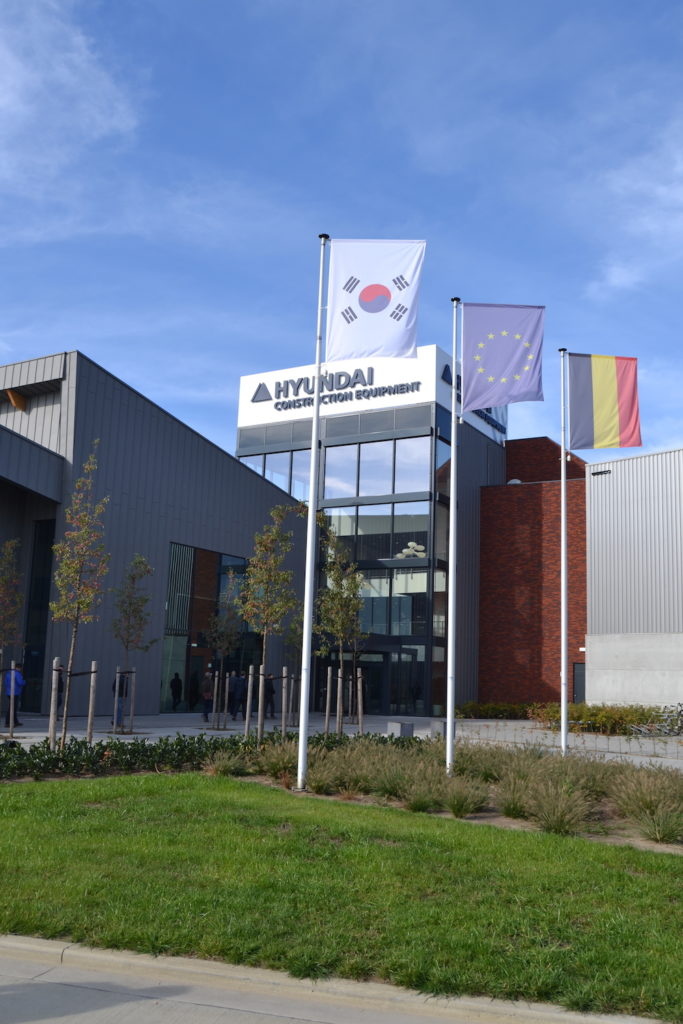 Any company will ultimately be judged by the quality of its products but the scale of its ambition can also be a useful barometer of the direction of the brand. If a manufacturer is aiming to dramatically increase its market share, for instance, then all of the characteristics a customer demands – in innovation, performance, reliability and after sales support – will need to be firmly embedded in its ethos, and that’s just what Hyundai Construction Equipment is promising.

In April of 2017 the Korean firm split with Hyundai Heavy Industries to become a fully independent business, and since then things have been moving fast. That same year saw the official opening of a new 81,000 sq metre European HQ in Belgium, a €35mn investment that provides 13,000 square metres of warehouse capacity for parts, and first class training facilities for its dealer network. This year global turnover is anticipated to be €2.5bn, with Europe contributing 13 per cent, or €325mn, of that total but, with the infrastructure in place – and a company that is now squarely focused on the construction sector – there are aspirations to make Hyundai a top five player by 2023 – a target that will require over a doubling of its present worldwide sales.

So just how are these objectives to be achieved? In the first instance, when it comes to the introduction of new technologies, Hyundai will need to prove that it can lead where others might follow – a reputation it has already been quietly forging in the last few years. Its HX excavators were amongst the first to offer a 360º camera array – the Advanced Around View Monitoring (AAVM) system – as standard, for example, whilst the likes of Intelligent Power Control and enhanced levels of connectivity put the fleet manager firmly in command in the battle for better cost of ownership and productivity.

Regardless of the manufacturer improvements to the efficiency and cleanliness of construction plant powertrains has been one of the driving forces of R&D departments across the globe but if you were to name another it would certainly be in the realm of machine management. That why Hyundai has developed its own solution – the Hi-Mate remote management system. The satellite-based technology now operates in real time and reveals not just the position of the machine, but a wealth of useful data, including fuel consumption, hours of usage, and idling, allowing responsible individuals to analyse the performance of individual operators. 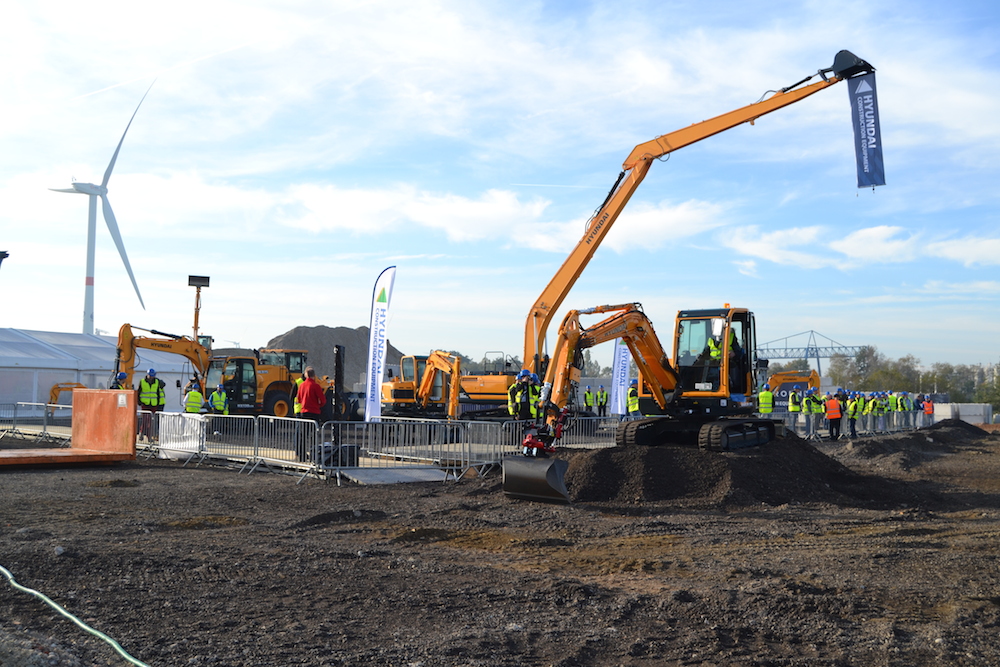 The recording of error codes allows for an effective preventative maintenance regime to be enforced, whilst routine repairs, such as the changing of an oil filter, can also be recorded. Geo-fencing has been proven to be an effective weapon in the fight against plant theft, or the unauthorised movement and use of machinery, and is a part of the Hi-Mate package and, with the ability to view multiple job sites either via a desktop computer, or on a mobile via an app, all the plant on the fleet can be seen anywhere and at any time.

Technology for its own sake is certainly not a path that this Korean manufacturer will pursue. Its researchers are instead focused on the core principles it is looking to improve, including safety, driver comfort, fuel efficiency, ease of maintenance, durability and ease of use. In an age when companies will run equipment from multiple brands the controls must be logical and intuitive, for example, whilst sustainability is addressed with an automatic idling shutdown, where the engine will automatically turn off after a pre-determined time. 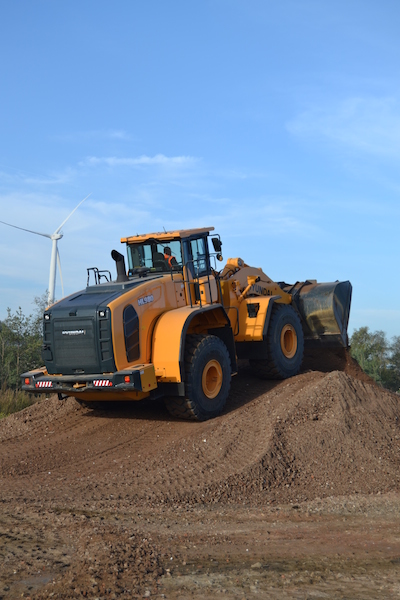 Comfortable Cabs
A driver safely stowed in their ROPS, TOPS and FOPS Hyundai cab can benefit from variable power control, which adjusts output to the application, whilst a large 8in. touchscreen monitor reveals a wealth of vital data. A happy operator is a productive one so cabs, even on the smaller equipment, have been designed to be spacious, with less vibration and noise, whilst the machine opens up as far as is possible in order for all the regular points of service to fall easily to hand. Moreover, in the realm of operator control, individual flow and pressure levels can be set for specific attachments, which can then be saved and returned to later. In safety, the 360º visibility from the AAVM system, is supported by the Intelligent Moving Object Detection (IMOD) function, which alerts the operators to the presence of people or objects.

When it comes to excavators Hyundai can service just about any customer requirement – from the smallest 1.6 tonne, R16 to the 120 tonne R120 monster – a machine that is shortly to make its UK debut with a quarrying company. Minis are classed from that smallest R16 up to 3.5 tonne, whilst the midis feature additional features, such as a 6 & 8 tonne compact radius option. There are five wheeled excavators, and seven wheeled loaders, with the heavy line HX excavators all now featuring Stage IV engines.

Compact Excavators
The ‘Hyundai Effect’ event was also an opportunity for customers and the assembled press to get up close and personal with a selection of units from what is now a formidable range of equipment, amongst them its machines in the mini and midi class, including the R17Z-9A compact excavator. This 1.7 tonne, zero tailswing unit is a equipped with a 17hp Kubota engine, that achieves 2metres of dig depth, 3.9 metres of reach and 15.5kN of breakout force. That R17Z-9A is a part of a compact portfolio which is now eight strong, with three zero tailswing, two compact radius and, for enhanced lifting and stability, two models with a standard counterweight configuration, whilst the R55W-9A wheeled excavator completes the family. Hyundai prides itself on partnering with the best in component and system suppliers, and that’s why its minis make use of Yanmar, Mitsubishi and Kubota engines.

If it’s a boost in digging performance you’re after then the R60CR-9A long arm option, paired to an additional counterweight, will maximise dig depth, reach and height clearance. Hyundai compact excavators can also be fitted with a tiltrotator, and optional steel tracks. On its larger models, Hyundai has also re-designed the hydraulic system to provide the operator with more precise control, whilst service access has also been improved. Indeed, both the R60CR-9A and its bigger brother in the range the R80CR-9A, benefit from a titling cab. All the cabs on Hyundai compacts are TOPS/ROPS/FOPS certified, whilst other safety features include boom and arm cylinder locks, and an optional overload alarm. 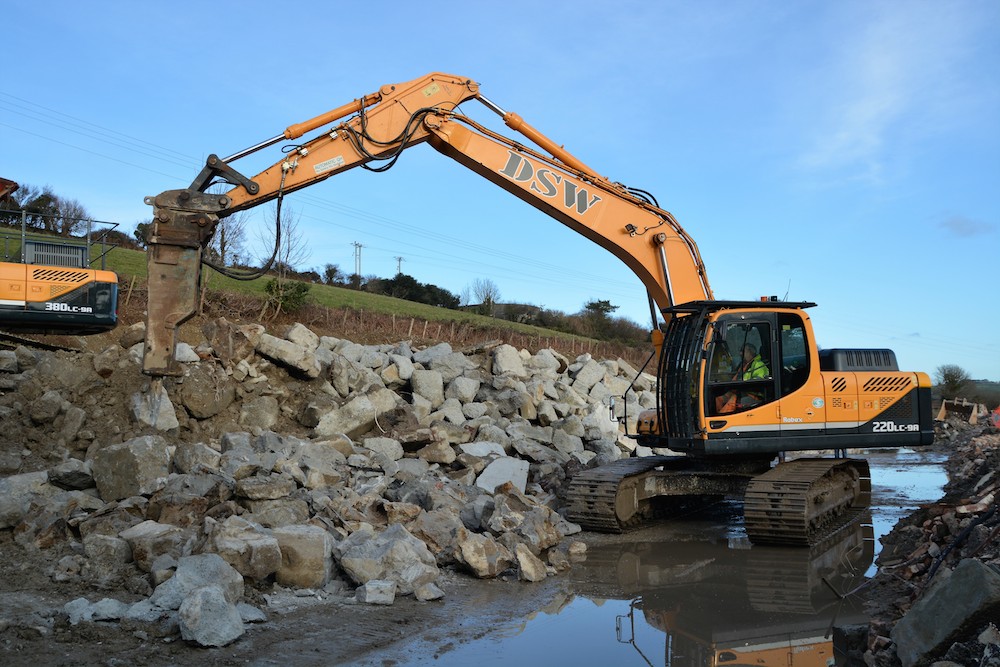 Crawler and Wheeled Excavators
The larger HW wheeled excavators range from 14 to 22 tonnes and, like all of it rubber ducks, the machine at the lightest end of that range, the HW140 is powered by a 6-cylinder Stage IV Cummins engine. The maximum dig depth on this 14 tonner is 4,650mm, with a bucket capacity of between 0.23 – 0.71 m³. The 14 individual crawler machines ranging from 12.7 – 52.4 tonnes are now designated as the HX series, and amongst these the HX145 LCR Crawler Excavator was on show. This is one of the three compact radius models to carry the HX brand, features a minimum tailswing design which makes it ideal for working in confined spaces, but retains the power to cope with heavy construction applications.

Across the crawler stable, Scania and Cummins engines are in evidence, whilst innovation in the hydraulic system also boosts performance. At its launch the HX machines also introduced variable power control technology to Hyundai machines, with the three modes, Power, Standard and Economy ensuring maximum performance in every application.

Wheeled Loaders
The Hyundai Effect event also gave visitors the opportunity to acquaint themselves with the manufacturer’s wheel loaders. These workhorses of the construction plant sector are equipped with standard buckets ranging from 3 – 7m2. The HL980 delivers 380hp, and a 5.4m2 bucket can help fleet operators mover veritable mountains of material in quarries or gravel pits. The HL955 has choice of standard Z-Bar linkage configuration, or parallel linkage with a two-masted boom design. For applications that require higher dump heights, such as loading high-sided trucks, all HL900 series wheel loaders are also available in XT or extended reach versions. For the kind of durability that the more extreme environments of landfill, scrap yards or forestry might require the HL960 HD model is equipped with robust and heavy duty front and rear ZF axles. Hyundai has also been generous with its standard equipment, including an exclusive on-board weighing system, accurate to an impressive -/+ 1 per cent.

0 0 0 0
Previous : Genquip Groundhog are awarded Considerate Constructors and UVDB Achilles
Next : Performance and specification sealed the deal with Taylor Lindsey who invests in the company’s first Hyundai machine