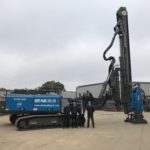 Lancashire-based Sheet Piling (UK) Ltd, the UK’s leading and long-established sheet-piling contractor, has taken delivery of a world first, which it commissioned in an attempt to speed up smart motorway projects and make life for Britain’s stressed-out motorists a little easier.

The world’s first long-reach telescopic leader rig (TM 12/15 LR) was the brainchild of the team at the Preston-based sheet-piling business and realised by expert rig manufacturers ABI Group, based in Germany, who built it to the precise requirements of their British client.

It differs from any other rig in the global construction sector by virtue of its long-reach arm, which has made it the world’s first long-reach telescopic leader rig.  The state-of-the-art vibratory installation rig, 14 months in the making, has an 8.1-metre horizontal reach, measured from the centre of its cab’s body, to the position in which it is capable of driving steel piles into the ground.  This is a full three metres further than any other rig worldwide.

The advantage is significant.  Rather than having to carry out enabling works and build a platform on which a rig can stand to drive piles into the desired position, the TM 12/15 LR is able to work from the existing carriageway, reaching the same position with its longer arm.  Skipping the enabling works phase can save a project at least two weeks in time and £40,000 to £60,000 in money, within a project within which a typical 100-metre sheet-pile wall is being installed.  If you then scale up this scenario, entire widening schemes can make colossal savings and be completed much faster.

Smart motorways are not the only environment in which use of this rig can bring significant benefits.  Any widening scheme, be that for a rail or other infrastructure-related project, can accrue its own advantages from this new piece of machinery.  Where projects are time-sensitive, saving a few weeks in the preparation stages is absolutely key.

Sheet Piling (UK) Ltd, located in the Northern Powerhouse region, has invested heavily in this piece of equipment, to the tune of £1.2m, but believes it will recoup that money relatively quickly.  The construction world has already become excited by the promise of the rig’s arrival and various construction groups and industry leaders are now sitting up and taking notice.

The new revolutionary rig was handed over at a site in Northampton and the Sheet Piling (UK) Ltd team has had several days of familiarisation training, which has equipped its enthusiastic fitters and rig operators with the operational knowledge they required.

Despite the major enhancement to the reach capacity of the rig, the innovation has not led to having to compromise on any other functionality.  The vertical reach is 3.9 metres and the rig offers a maximum or extracted pile length of 16 metres.

The rig also has a powerful MRZV 20VV vibratory hammer and a MDBA 4000 auger attachment, as well as a Euro Stage IV emission engine.  It provides the contractor with an extraction force of 175kN and a crowd force of 100kN.

Balancing the weight of the extended arm was challenging but achieved by adding a 3-ton counterweight.  A heavy-duty hydraulically extendable undercarriage has a 4.2-metre overall track-width and this reduces ground-bearing pressures.

When the rig is deployed on motorway widening projects, the removal of the need for enabling works and platform building will reduce the volume of construction traffic having to enter and exit the site.  This will, in turn, reduce the impacts on traffic flow on the main carriageway that runs past the site.

Sheet Piling (UK) Ltd believe this rig will shake up the construction sector, with other rigs of this kind being developed, but for now it can steal a march on the market, due to having exclusivity over the design that will see no competitive rig emerging until 2020 at the earliest.  It believes it has a 16-month window in which to reinforce its positioning as the UK’s number one sheet-piling contractor and that this will enable it to grow its turnover and its workforce, as it responds to demand.

Managing director, Andrew Cotton, says: “There will be far more certainty behind the key deliverables to which construction companies commit, if they use the long-reach rig.  This, coupled with the highly attractive cost-savings will not escape the attention of the big construction firms.  In fact, our telephone line is already red-hot and we can already see that our decision to bring our vision to fruition has been vindicated.

“Apart from the cost and time-saving that utilising this rig brings, there are other advantages.  Motorists will not have to put up with smart motorway infrastructure works for as long and there are benefits for the environment too, as vegetation clearance on embankments will be much-reduced, leading to less tree-loss – vital for carbon absorption and the fight against climate change.

“We believe this to be the most innovative development within the construction sector in the last 30 years and believe we can change the face of UK infrastructure project with the new methodology this long-reach rig brings to the sector.  The TM 12/15 LR ticks every box for contractors and this innovation will revolutionise the smart motorway programme as it is rolled out over the next eight years.”