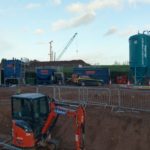 A system from Siltbuster has been used to treat excess waters encountered during the construction phase of Severn Trent Water’s raw water pipeline between the River Severn in Stourport-on-Severn and Frankley water treatment works.

The 26-kilometer pipeline is part of the £300m Birmingham Resilience Project (BRP) and will provide an alternative way to supply water to over one million Severn Trent customers when the Elan Valley Aqueduct, which currently supplies the region, is shut down for maintenance.

Barhale, Severn Trent’s principle contractor, contacted Siltbuster at the planning stage of the high-profile project to discuss the management of waters, as it soon became clear groundwater with contaminants of concern were going to be encountered at isolated sections of the works.

Laboratory analysis carried out as part of the extensive ground investigations showed the presence of heavy metals, Total Petroleum Hydrocarbons (TPH), solvents, pesticides and herbicide contamination at locations close to or within the boundaries of former landfills.  With concerns these mobile contaminants could enter the underlying primary aquifer and cause harm to the aquatic life in the River Severn, the handling of site waters was critical.  All construction waters needed to be treated so that they met stringent standards.

Water from the river intake, shafts and surface water runoff, was pumped through a central location and processed by the Siltbuster system, which was designed to deal with a maximum operational flow rate of 70m3/hr.

Siltbuster fitted its equipment with monitoring on the inlet, this showed if pumping activities were altering the groundwater regime and pulling contaminants through.  Further real time monitoring on the outlet enabled Barhale to be sure the treated waters were always within consent, and safe to be discharged into the adjacent River Severn.

Weekly laboratory water analysis carried out by Barhale showed that not only was the system stripping out all the potential pollutants to levels below those required for discharge, but in some instances the removal was so effective that the contaminants were below the limits of detection within the laboratory.

Siltbuster’s role in the project is ongoing. Over the past 12 months on site, its equipment treated over 27,426m3 of waste water enabling the pipeline construction works to be completed within environmental consent.

Dr Richard Coulton, CEO at Siltbuster, concludes: “We’re delighted to have worked with Barhale on the BRP project. It shows the real strength of the Siltbuster team and how each element – our onsite experts, engineers and system designers – works together to deliver a solution”.

“The project also illustrates how important it is to bring us on board at the development stage of a major project.  Doing so ensures our expertise is used at the earliest possible moment – so potential problems are avoided, and even the most challenging site water treatment is planned, controlled and effective and best practice is achieved.”