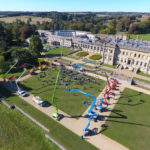 Nearly 400 delegates from across a wide spectrum of industries and sectors debated the future of powered access at the 10th Working At Height Best Practice Forum, hosted by Nationwide Platforms.

The role of virtual reality and augmented reality technology in training and operations, standardisation of equipment, and environmentally friendly engines were the key topics for delegates who gathered at Heythrop Park at the end of September.

Mark Keily, HSE Director at Nationwide Platforms, said: “Our 10th anniversary event has proven to be our largest and best event to date. The speeches, keynote speakers and breakout sessions were all very informative and it has been great to receive the views, ideas and challenges on working at height with powered access from such a large number of delegates. This will prove invaluable to help us shape the future of powered access for the long term benefit of all.”

Delegates were overwhelmingly positive about the development and use of VR simulators to enhance operator training.

Guest speaker Dan Platten, Health & Safety Director at the Skanska Costain Strabag joint venture delivering the HS2 Main Works contract, said: “VR technology is one of the things we can use to make sure people are competent before they go onto the work site, even if they do have a current operator licence they may not have used the equipment for a long time. [Also] we’ll be mandating something like the telematics system to make sure that only the right people are using the right equipment and that they are trained to do so and competent.”

The potential for augmented reality was highlighted by fellow speaker Guru P Bandekar, Vice President, Global Engineering, at JLG Industries: smart device apps that translate instruction and warning decals on equipment into the operator’s language are being prototyped. Also, technology that allows equipment to be loaded and unloaded via a remote control app on a smart device is on trial in the USA.

Bandekar and Platten noted that the combination BIM and VR allows contractors to design out safety risks long before work starts on site.

Other contributors included: Matthew Harrington, Senior Partner at law firm BLM, who gave a talk on the potential legal risks to companies and employees who might choose to ignore legislation and best practice including what the consequences could be under the sentencing guidelines. Matthew then went on to join Giles Councell, Director of Operations at IPAF, and Ray Cooke, HM Principal Inspector for Construction from the HSE on an expert interactive Q&A panel. Engine emissions were also a hot topic of debate. Paul Marks, Director of Nationwide Platforms’ R&D division, said: “There were a range of views on engines, from keeping it simple and sticking with diesel to requests for us to go fully electric as soon as possible. There was one suggestion to fit solar panels to powered access equipment.”

The near-60 delegates from the telecoms sector benefitted from a bespoke session during the event, with input from the Mast and Tower Safety Group. Peter Douglas, Operations Director at Nationwide Platforms, said: “There have been a number of incidences of dropped objects from working at height in the telecoms sector; we had a re-enactment of the ‘just get the job done’ mentality that can lead to objects falling: this provoked debate and thoughts about what management and responsible persons on site can do to avoid this. It’s about behavioural change.”

With more than 20 exhibitors (including 11 demonstrating their equipment outdoors), delegates had plenty to see and learn outside of the conference and breakout sessions. Delegates were encouraged to take selfies at height from a truck-mounted platform, to compete in a ‘Dropped Objects Awareness’ competition with prizes for those who managed to land a bean bag closest to the target from a boom lift, and to also experience Nationwide Platforms’ Mobile training centre & VR Simulator.

The Forum concluded with a networking dinner, during which delegates were entertained by Sky Sports Soccer Saturday presenter Jeff Stelling.

Next year’s event will take place in September. A date will be announced soon.