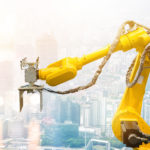 As technology continues to evolve, its impact on various workplaces is becoming more and more apparent. But the construction sector has something of a reputation for being a little slower to pick up and adapt to new technology and artificial intelligence. Has the sector shook off this mantle and begun to embrace technology quicker? What advancements in artificial intelligence have brought benefits directly to the construction site?

What is artificial intelligence (AI)?

Artificial intelligence allows machines to display their own intelligence via algorithms. These algorithms essentially amount to a set of rules and guides that allow a computer to solve problems from data given to it. This enables machines to complete tasks, process calculations, and offer solutions and routes for a given action.

It’s easy to see how such technology would be useful in the planning and design stages of construction — AI can organise information and offer corrections or suggestions to solve problems in the early stages of a project. AI machinery can also be utilised in surveying a site, and then using the data gathered to produce blueprints, construction plans, and 3D maps. But it is also finding its way directly into the work it has helped to plan!

We’re already seeing artificially intelligent machines hard at work alongside humans on a construction site. Last year, we were introduced to SAM, the Semi-Automatic Mason, who can lay around 3,000 bricks every day. A human can manage around 500 bricks a day on average, by comparison.

According to the Mirror, the Semi-Automatic Mason is already making waves in the US construction industry, and the UK is next on its agenda. The machine isn’t about to remove the need for human input on construction sites though — it still requires human supervision and set-up, as well as needing a helping hand for tricky angles and tidying up!

Beyond the physical tasks of the construction site, artificial intelligence has great potential to improve health and safety prospects for those who operate site machinery. In fact, it may be able to reduce the need for a human to control the machine in question, as artificial intelligence would take on the role of machine operator.

For example, autonomous machinery is already in use within the construction sector, mainly in the form of a vehicle that makes repetitive moves. As Tech Emergence points out, the use of autonomous machinery in construction is a huge benefit to health and safety measures, as the machinery is often taking on dangerous tasks, such as working at a height. This is done mainly with sensors and GPS, and allows the operator to be outside of the vehicle and safe.

Over in Japan, Komatsu have expressed their desire to use artificial intelligence to aid productivity and safety on construction sites via a mapping system. By having data-gathering cameras on heavy machinery and equipment, the machines would, in a sense, “be alert” to their surroundings. So, it wouldn’t just be the human worker on site that needs to pay attention; they would be supported by machines with their own eyes and ears!

As previously discussed, artificial intelligence has the scope to survey and record data from the construction site for the benefit of planning and designing. Now, the act of observing and recording data is being implemented directly into site machinery.

A good example of this is with the Compact Assist from Volvo. This software automatically maps passes that a soil or asphalt compactor makes, and gathers data such as the temperature from each pass. From this, Volvo says they have created an algorithm that could change and adapt to new asphalt mixes.

Artificial intelligence’s potential as the eyes and ears of construction extends to its ability to oversee projects and actively contribute to discussions regarding any problems that may arise. For example, if a problem should manifest during the construction of a new bridge, the data gathered from the AI onsite, the data input by workers, and the AI’s own database would be able to produce an offered solution.

The vital data that the artificial intelligence would consult during this process is based on a historic archive of past projects, which the AI would know to look through for similar projects and issues and how they were resolved. This means that engineers can make decisions and calls based on evidence that may have not been easy to find previously.

With the technology already blending into site machinery and construction, what is next in the building world for artificial intelligence? Some suggest that it will continue to make strides mainly regarding health and safety, but there is certainly the scope for AI to take on more practical roles, such as the bricklaying machine already at work among us!