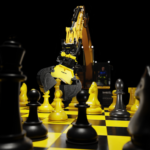 Construction Plant News explores some of the latest innovations from Tiltrotator specialist, Engcon.

No piece of equipment is doing more to turn excavators into multi-tasking tool carriers than the tiltrotator, and engcon is at the forefront of some of the latest innovations. Since the beginning of the ‘90s, the Swedish manufacturer has been supplying these flexible wrists for excavators in the 1.5 – 33 tonne weight range. Already a staple on machines on the continent – and especially in the Nordics – the ability to dig in several different directions, and make simple tool changes, means the product is rapidly gaining traction in the UK. Indeed, tiltrotator advocates claim that a tilting and rotating bucket on a digger can simplify work and increase efficiency by up to 25 per cent.

In recent years, the EC-Oil quick hitch system has been introduced to the tiltrotator concept, connecting hydraulic tools automatically, without the driver having to step out of the cab to make a manual connection of the hydraulic couplings.

It is both convenient and saves valuable work time for operators by not having to step out of the cab to connect with manual, pressurised and dirty hydraulic couplings. The lower quick hitch of the S40 also gets several extra hydraulic outlets as well as a smart function with the possibility to connect a detachable gripping cassette. It is now also planned for Sweeper rollers and other tools.

A detachable gripper cassette means that the driver can easily and quickly disconnect the gripper when it is not needed. It is a weight saving of about 35kg and, if you count how many times you lift the bucket in a day, that quickly translates into a fuel saving and reduced wear and tear. 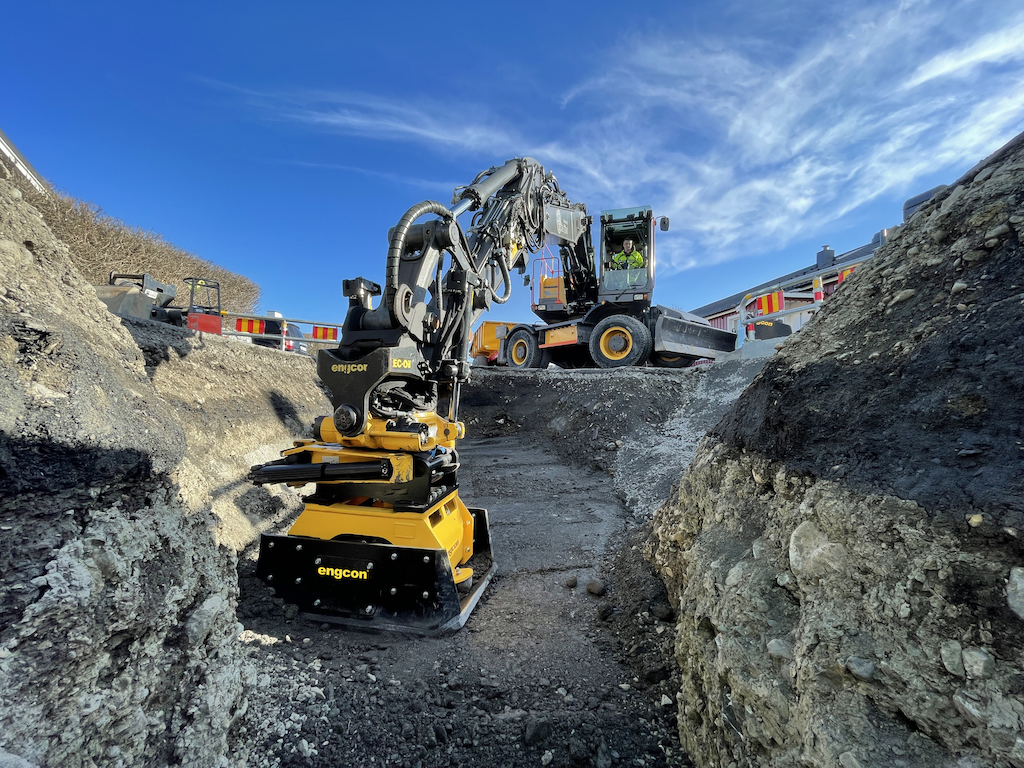 Extra equipiment
engcon has also chosen to equip the EC206 with a completely new swivel with increased capacity and more outputs for extra hydraulics on the quick hitch S40 under the EC206.

In addition, there is an extra socket on each side of the quick hitch and an extra socket on the back of the bracket. Extra sockets on the side of the quick hitch bracket are also possible, feeding directly from the excavator’s extra hydraulic socket. This then enables a higher oil flow than the outlets that are controlled via the tiltrotator’s valves and enables operation of, for example, slope mowers or other tools that require slightly higher oil flows.

It also has the advantages of not having any hoses in the lower quick hitch and will be the same concept as the larger models, where the EC-Oil blocks and extra sockets are screwed into the bracket. On the S40, the locking cylinder is also screwed directly into the block, and this means that the bracket has no hoses or moving parts that rub and cause wear.

Additional features on the new EC206 mean that it is now possible to equip it with both tilt and rotation sensors for the machines that have machine control systems. 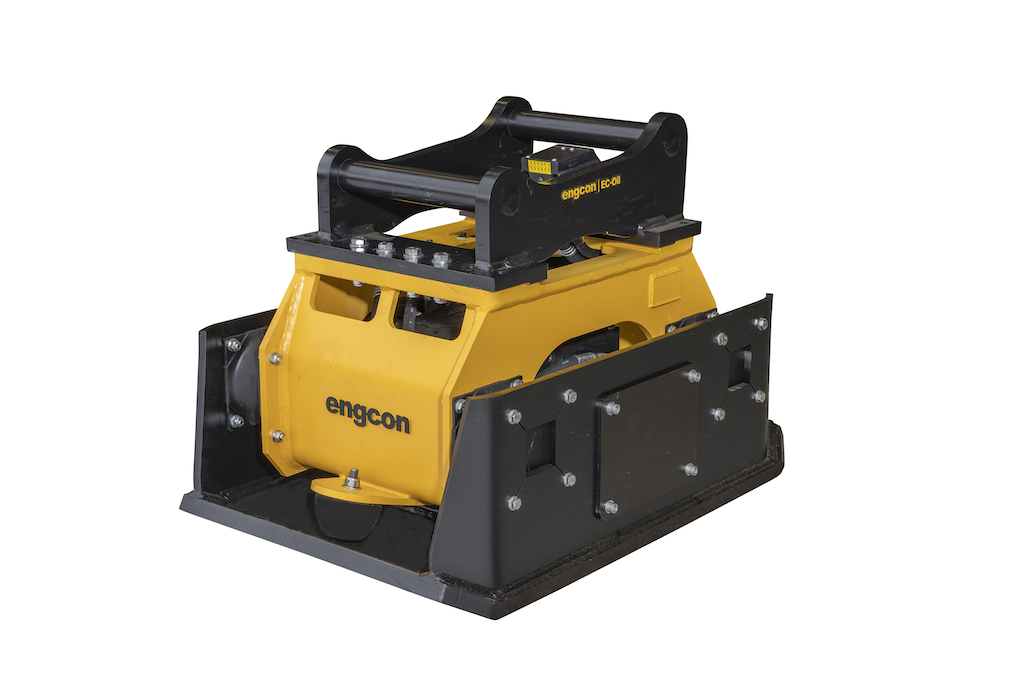 Third generation tiltrotator
2022 has also witnessed the arrival of the third generation of engcon tiltrotators. The new system will apply smart technologies, address sustainability issues, and will in tune with the onward and relentless march of electric excavators.

The third generation is based on a newly developed type of valve in combination with smart software that collaborates with the excavator’s load-sensing hydraulic system. This optimises both the tiltrotator’s functions and the excavator’s movements, which leads to smoother digging with higher precision. At the same time, wear on the digger, and need for maintenance, also decreases.

An app supports individual customisation, including connected remote diagnostics The new series EC-Oil system is in evidence, whist sensors have a plug & play solution for both integrated and third-party machine control systems. 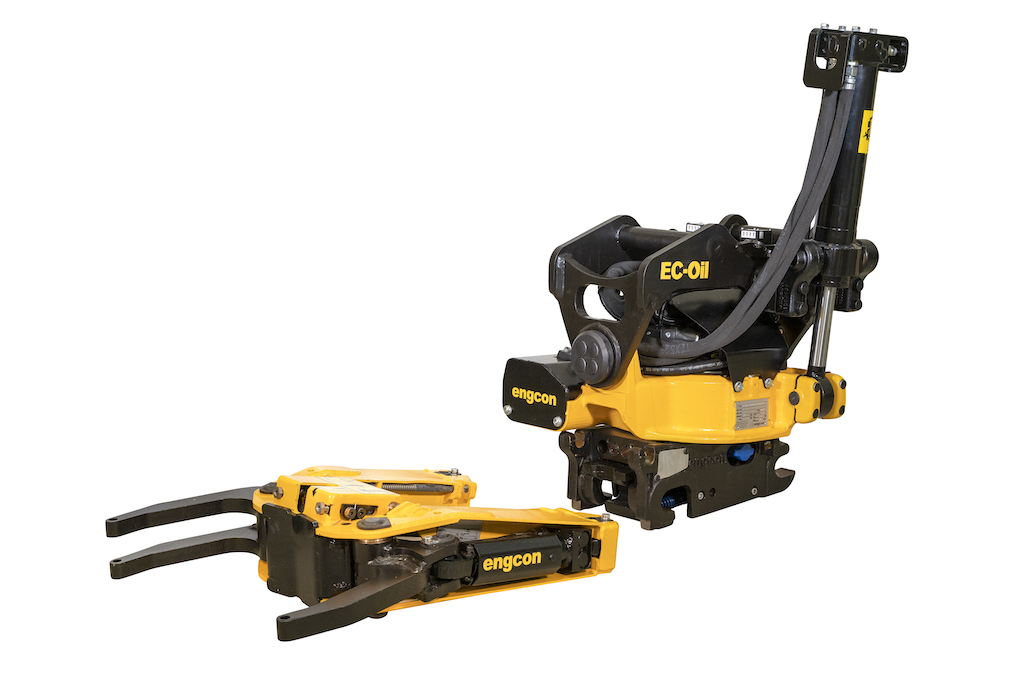 PC6000 Compactor Plate
Combining a compactor plate with an excavator is becoming more common for soil compaction, reducing the number of machines or tools required for the task. Personal safety has also been increased by removing the need to have a person with a hand operator compactor in a shaft with the risk of walls collapsing because of vibrations or a chain or strap breaking whilst lifting equipment. Furthermore, the working area becomes larger as it is possible to rotate and angle the compactor plate so that it follows the lines of the ground.

Adapted for use under a tiltrotator, the engcon PC6000 compactor plate is designed for excavators in the 12-24 tonne class, allowing the operator to tilt and rotate the plate. “Among other things, it’s possible to compress around slopes and wells, without constantly having to change the position of the machine,” explains the product’s designer and project manager, Johan Johansson. Like other hydraulic tools from the manufacturer, the EC-Oil automatic quick hitch system is standard on the new compactor plate PC6000.