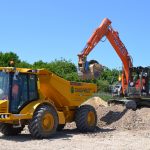 Hydrema is one highways contractor’s ADT of choice. Lee Jones talks to Caulfield Contractors about its recent investment in these compact articulated dump trucks.

Caulfied Contractors is that still relatively rare thing in the construction industry – an owner and operator of its own extensive fleet of plant. The preferred contractor for Highways England certainly has the contracts in place to justify the capital expenditure with a presence on the M6, M1, and M23, amongst many others, and has the experience and the expertise to know exactly which machines will optimise its efficiency on the projects it has in hand. “Smart motorways have been a considerable source of work for us,” explains Jean-Pierre Schlehmeyer. “We’re running nine gangs on the M6 at the moment, for instance, and our work is quite plant intensive. That means we need specific machinery that suits our jobs.”

Caulfield is a company that prides itself on being at the forefront of the latest technology and working practices on its projects, and this is a pattern that continues with the company’s investment in articulated dump trucks. “We took the decision to reject forward tipping site dumpers as a muck shifting solution on site for safety reasons, and also because of the vastly increased levels of efficiency that we can generate from a Hydrema,” continues Jean-Pierre.

Caulfield presently has two 10-tonne load capacity 912F models in operation, with at least two, and possibly four more, coming. All the machines will feature the MuliTip system, which allows the skip to slew 180º degrees, so that loads can be discharged by the driver from either the rear or the side. As a specialist in highway work, this is one contractor that strives to design in safety into a project long before the ground is broken and that is reflected in its plant procurement. The Hydremas, for instance, have been additionally equipped with proximity warning alarms and 360º cameras, whilst additional modifications by the manufacturer prior to delivery include a hydraulic hitch to allow the towing of a trailer of up to 12 tonne.

“The compactness of this machine is a key consideration for us because it allows them to be utilised on a wide range of projects but, at the same time, the capacity and the workload compared to a nine tonne dumper is so much higher,” declares the Caulfield Director. “As a business we just don’t want our operators sitting on a tipper exposed to the elements anymore, and in these machines the driver is fully protected in an air conditioned cab with high levels of all round visibility – and there’s even an air-conditioning system fitted as standard. The swivel skip is also a fantastic feature, in making the machine far more at home in narrow or congested sites.” Moreover, the MultiTip on the 912F is a particularly useful function when unloading into a trench and, with a tipping clearance of 105 cm, operators can discharge material over edges or onto high piles.

Because the engine is positioned behind the cab the driver is afforded an unobstructed view of the path ahead. The engine is Stage IV compliant thanks to Diesel Oxidation Catalyst (DOC) and Selective Catalytic Reduction (SCR) systems with AdBlue. Witnessing a Hydrema in action on site and the appeal to a contractor like Caulfield is immediately apparent. A single unit will easily move a 1,000 tonne of material in day whilst its lighter weight and high levels of traction makes it suitable for even the most treacherous ground conditions. The 147hp Cummins engine offers more torque at low revs and drivers will welcome the user friendly controls.

One of the significant points of departure for the 912 compared to its competitors is the articulated and oscillating pivot point. Stability and safety is significantly enhanced by a centre pivot with hydraulic stabilisers which automatically transfers the weight to where it is needed. The chassis design ensures that the front and rear wheels are running in the same track, and the standard twin tyres gives excellent traction with minimum ground damage.

The first two Hydremas to be added to the Caulfield fleet have been engaged in constructing the compound for a major smart motorway project. The site will ultimately see up to 80 cabins housing the main contractor’s staff and logistics operation for the duration of the project, but first it is the job of these versatile and compact ADTs convey material to a waiting crusher and to distribute the imported 6F2 Recycled Capping. On this job the agricultural hydraulic hitch has proven to be a particularly useful function in that the machine can convey other equipment and materials around site in trailers. “You simply wouldn’t want anything bigger than these 14 tonne machines running around a site like this one,” explains Project manager, Wayne Douglas. “A machine of that size equipped with the MultiTip and distribute material much quicker but will easily cope with the ground conditions.”