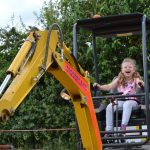 The building industry’s struggles to inspire the younger generation to join its ranks are now well documented, but whilst school and college leavers remain unmoved by site work as a career choice there’s no doubting the appeal for those of tenderer years. Whether it’s Bob the Builder or Emmet from the Lego Movie, the very young are exposed to a whole host of tradespeople who are heroes of the piece, a fascination which also extends to the sector’s machinery. Diggers and dump trucks occupy acres of shelving in our nation’s toy stores, and where would the aforementioned Bob be without Scoop the backhoe loader, Lofty the mobile crane, and Dizzy the cement mixer? Put simply, children love diggers, so the idea of actually being able to operate a full size example represents rather an exciting prospect to your average toddler. This was something that Hugh Edelneau, founder of one of the country’s most prominent plant hire firms, H.E. Services recognised, and it was his dream to build a theme park with construction plant at its heart.

The story begins when Hugh bought a second hand JCB 3C whilst completing an engineering degree at Cambridge University in 1972. Forty years on and the company he formed is the UK’s largest specialist excavator hire company. The lightbulb moment for Diggerland would arrive when the plant hire entrepreneur realised just how popular his company’s open days were with children. An attraction that allowed even the very young to get up close and personal with machinery would surely be a winner and, with four parks across the UK, and an expansion to the United States, Hugh has certainly been proved right.

So just what can visitors expect from a day at Diggerland? Individual parks can be found at Devon, Durham, Yorkshire and Kent, and it was the Strood site in the ‘Garden of England’ that we visited. The attention span of small children is an unforgiving master, so if the plant-based attraction could pique the interest of my three-year old son and six-year old daughter it would have passed a very stern test indeed. On entering the park the most prominent ride is the ‘Spin Dizzy’ which makes use of a Komatsu PC210 to propel visitors in an adrenalin whirl of high speed spinning in a specially modified bucket. As a devotee of theme parks my daughter certainly approved, and multiple subsequent rides were a testament to its status as amongst the most popular of the day’s entertainment – although given the toll it takes on the digestive system this should certainly be a pre-lunch exercise. Although Diggerland Kent was busy on the day we visited queues for each attraction were manageable, whilst there is a very good range of rides across what is a deceptively large site. As well as that, everything but the dodgems and Formula 1 Fun Cars are included in the price of general admission.

The opportunity to dig with a full-size excavator is an experience that no child will forego and, whilst the smaller children like my three-year-old, had to be accompanied at the controls by an adult, older boys and girls can be let loose with bucket and boom. A range of rides that make use of Komatsu PC14s test hand and eye co-ordination with Skittles, Dippy Duck – where fledgling operators are required to hook a plastic duck with the dipper – and Buried Treasure all providing a perhaps unexpected insight into the considerable skillset of real plant operators. The Giant Diggers, which are actually JCB 8065 tracked models, encourage little ones to dig and dump earth, again an exercise which many have no doubt realised is not quite as easy as they envisaged.

Indeed, the brains behind the whole Diggerland concept have clearly been very imaginative with just what can be achieved with construction plant. The Sky Shuttle, for instance, makes use of a telehandler to provide visitors with panoramic views from 50ft in the air. Skid steers, which are always amongst the most fun pieces of machinery to drive, can be navigated around a dirt track, as can site dumpers, whilst JCB mini excavators are the power behind the Dirt Diggers experience. The Dig-Around is the H. E Services-owned site’s take on the centuries-old favourite of fairs up and down the land – the carousel – whilst there’s also a Diggerland train that makes use of a 1 tonne Thwaites dumper as an engine. All of the attractions are accompanied by ‘Fun Facts’, which lists what machine is being used, its spec and the price. Many members of the public will be entirely ignorant of the often very high monetary value of a piece of plant and surprise is no doubt voiced by many to find that you would need to part with the best part of £28,000 to acquire even a mini excavator.

The tag line for the Diggerland experience is ‘buckets of fun for everyone’ and care has been taken to ensure that there is something for all ages. One of the newest attractions, for example is the StackAttack, where a pair of Avant 200 Series Loaders have been fitted with a unique grapple. The challenge is to move and stack giant digger and dumper tyres and challenge it certainly is. The fun doesn’t stop there either because on selected days the parks also play host to digger and dumper racing whilst the facility has it’s very own team of stunt operators, the Diggerland Dancing Diggers perform feats of daring with JCB Backhoes.

0 0 0 0
Previous : Project Profile: ‘Hy’ Roller
Next : Plantworx/Railworx: The Show Must Go On