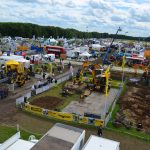 Plantworx/Railworx: The Show Must Go On

Whoever said that “there is no such thing as bad weather – only different kinds of good weather” had clearly never been to a construction plant exhibition. Just a few days before the doors opened on Plantworx 2017 the nation was basking in a record run of 30º degree temperatures. Fast forward a week and the event’s opening day visitors were greeted with persistent and heavy rain. There is no doubt that contractors and hirers are hardy souls but even they would not relish a cold day in supposedly flaming June. Add to that conditions underfoot that were redolent of a bad day at the Somme and it is clear that a fresh approach for the industry’s showpiece exhibition was required – and that’s exactly what its new home promises to deliver. Of course, as an outdoor event, Plantworx will always be at the mercy of the elements, but the East of England showground in Peterborough offers welcome mitigation. More hard standing, a network of permanent walkways, better drainage and vastly increased levels of exhibition space will all make for a more comfortable experience for visitors whatever the heavens might bring. With the demands of cleaner powertrains, and digital technologies through machine management and telematics, the plant sector is undergoing a period of unprecedented change, which means there will never be a shortage of innovations to showcase when the show welcomes visitors on 11th – 13th June 2019. And it’s not just the machines that will be connected because the showground can also offer visitors excellent Wi-Fi facilities and mobile phone network coverage.

In fact, the East of England Arena and Events Centre, to give the location its full title, is well-versed in holding sizeable machinery exhibitions having played host to LAAMA every January for some years, and the CEA organisers can utilise a significant level of existing infrastructure. Not only that but with good access from the A1, the venue is easily accessible by car, with parking for over 22,000 cars, whilst a shuttle bus service will be in operation to take Plantworx punters to and from the nearby Peterborough railway station.

As before the show will be a mix of static stands, with areas reserved for breaking ground in live demonstrations, whilst there’s also an outdoor arena capable of hosting specific functions. At Bruntingthorpe indoor spaces were achieved with two temporary marquees but East of England is equipped with a number of purpose-built facilities. An arena will be the home to the show’s static indoor stands, for instance, whilst the pavilion will house the skills area, both of which provide significantly increased areas of space on 2017.

Despite what can only be described as desperately unfortunate collision with inclement weather, Plantworx has achieved steady growth since the first show in 2013. In its debut year Stoneleigh Park in Warkwickshire welcomed 260 exhibitors, Bruntingthorpe two years later saw 344 companies support the show, whilst 2017 would house 396, and the target for 2019 is over 500. This is achievable not just through the flexibility and room for expansion that East of England affords but also through another big change for Plantworx 2019, because the June event will play host to not one but two shows, with Railworx running alongside the established construction machinery exhibition. With the huge levels of investment planned for our national rail network in the years ahead, not least the billions that will be poured in to HS2, combining a construction and rail event would appear to be particularly apposite, as JCB Director and CEA Honorary President, David Bell explained in his speech at the official launch: “Wherever rail infrastructure is put in place, alongside the direct rail specific equipment, there is always supporting infrastructure that requires more generalised construction machines. This is especially true with HS2, where its success is totally dependent on bringing together the supporting residential, commercial and high-tech building networks around the station complexes.”

The plan is for Railworx and Plantworx to be one united show with the areas for each clearly identified and easily accessible. “Railworx will be an opportunity for suppliers to display specialist equipment, such as road rail vehicles (RRVs), tampers, rail movers, rail vacs and wiring trains,” explains Jolene Price, Director of Rail Media. “It’s also an opportunity for manufacturers and suppliers to meet those operating, buying, and specifying tools, plant and equipment. The event will also forge closer links between rail and the wider construction industry.” With the looming skills crisis continuing to cast a shadow of the industry Plantworx and Railworx will also reaffirm its commitment to the development of the next generation. “The CEA and Plantworx has been working with Primary Engineer, by way of sponsorship and supporting engineers, since the 2017 event”, declares Nigel Baseley, the Head of CEA’s Skills Council, “and are also set for a second consecutive year with more than 15 Coventry Schools committed to taking part in the project in 2018. This STEM project is vital to encourage young people into our industry – we need young engineers to ensure the future growth of our sector.

The CEA and Plantworx have also confirmed that the Primary Engineer event will be coming to Plantworx and Railworx in 2019 working with the Primary and Secondary Schools in the area and will be making the event bigger than before with more schools involved.”