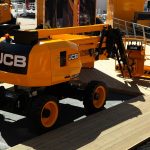 Earlier this year JCB announced a major move into the access market, but what progress has been made in penetrating the sector since then?

“It was our customers that told us we need to be in the access business,” declares the company’s Richard Butler, “and what we offer in the future will continue to be driven by them.”

The latest entrant to the $8 billion dollar industry is now developing some new clients of its own with the announcement of 2 Cousins Powered Access as the first ever JCB Access customer in the world, when it bought a new S1930e model at the product launch – one of nine all new electric scissor lifts.

“Because we already have the infrastructure in place in terms of the dealer network, and many of our existing hire customers already have complementary access divisions, we’re expecting to be able to announce a pretty steady flow of deals in the months ahead,” continues Richard, “but so far it’s actually been about 60 per cent new customers.”

For any hirer to make the switch from the more established names in the MEWPs business they will need to have faith in the product and JCB has worked hard to engage with end users to ensure it meets their requirements, but what can those companies expect in terms of further development? One feature that is already present on those scissors as an option, and will be standard on the booms, is LiveLink, the Staffordshire-based manufacturer’s telematics system.

“Telemetry is still relatively new on platforms but there are real benefits to the system for hirers because the ability to monitor the machine’s remotely will improve fleet management productivity. If a machine is being abused by a particular contractor, for instance, then the hirer will know about it.”

It is no secret that JCB’s Access machines are presently being manufactured in China by a supplier company, but Richard is still keen to stress that these machines still embody the DNA of the Staffordshire-based manufacturer.

“All JCB access platforms are designed in-house and, as far as their manufacture is concerned, the best analogy is that we rent space in an existing production facility, but the machines are very much the product of JCB people,” Richard explains.

“We simply didn’t have capacity in existing premises, and there are already a number of component manufacturers in China, so it makes sense. As for the future, if the volume of demand meets our expectations then we would anticipate that there would be assembly plants around the world, but this is something that would be market driven.

Conexpo was the setting for the unveiling of the first JCB articulated boom platform – the 14.9m AJ50D and four other articulated boom models will follow, along with 10 diesel telescopic booms.

In common with the scissors, the products are certified by TUV and meet the latest EN280 legislation. Whilst the 14.9m (50ft) model is likely to be the bread and butter, the articulated range will extend to 80ft, whilst the telescopic will reach 135ft as a maximum.

“This AJ50 features the JCB by Kohler engine already present in our mini excavators and smaller telehandlers,” continues Richard, “so it’s a unit that existing customers will already be familiar, and there will also be one electric model.

“At present there are no hybrid options but the market is undoubtedly being pushed that was and, as we move and progress, it’s something that we will certainly be looking at.

“The whole JCB access concept has been customer driven, which is why secondary guarding is standard on booms, because that’s what end users have been asking for.”

Whilst the JCB’s booms have been built to be rugged and reliable they are certainly not simple, with features like a fully digital control panel a testament to the degree of technological sophistication.

“In general, our customers want the machines to be faster and smoother in operation, and there’s a lot of cross-over technology from existing product lines, like LiveLink, for instance. We’ve worked hard to make sure that the product’s right and with the sales that we’re starting to see getting the machines out there and demonstrating their qualities is paying dividends.

0 0 0 0
Previous : Quick Quip: Conquip Serving the Industry
Next : Decision of the Board