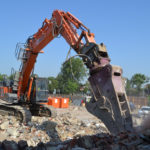 The demolition sector is a merciless environment for machinery and that makes durability a prerequisite. That’s why Essex-based Maldon Demolition only deals in construction plant at the premium end of the spectrum, including a fleet of excavators that are exclusively Hitachi, complemented by a Komatsu WA470 loading shovel, and a Powerscreen crusher, and those excavators are now armed with the latest in Prodem attachments.

“We’ve made quite a substantial investment in the brand, and I would say that around 90 per cent of our attachments are now from the one manufacturer,” explains the demolition contractor’s Lee Trowbridge, “and in terms of value for money, I don’t think you can really beat them. Wear parts are readily available, there’s a low cost of ownership, and they are very productive in use.”

Maldon Demolition’s kit can be found tearing its way through structures across the south east and into London, with up to seven projects currently underway. The kit its diggers are wielding in anger includes five 20 tonne PRB200 breakers and one PRB500 unit. Add to that three PSG1100 selector grabs, as well as its rotating pulverisors, and a veritable arsenal of weaponry in the distinct Prodem purple reveals a considerable level of trust in the equipment. 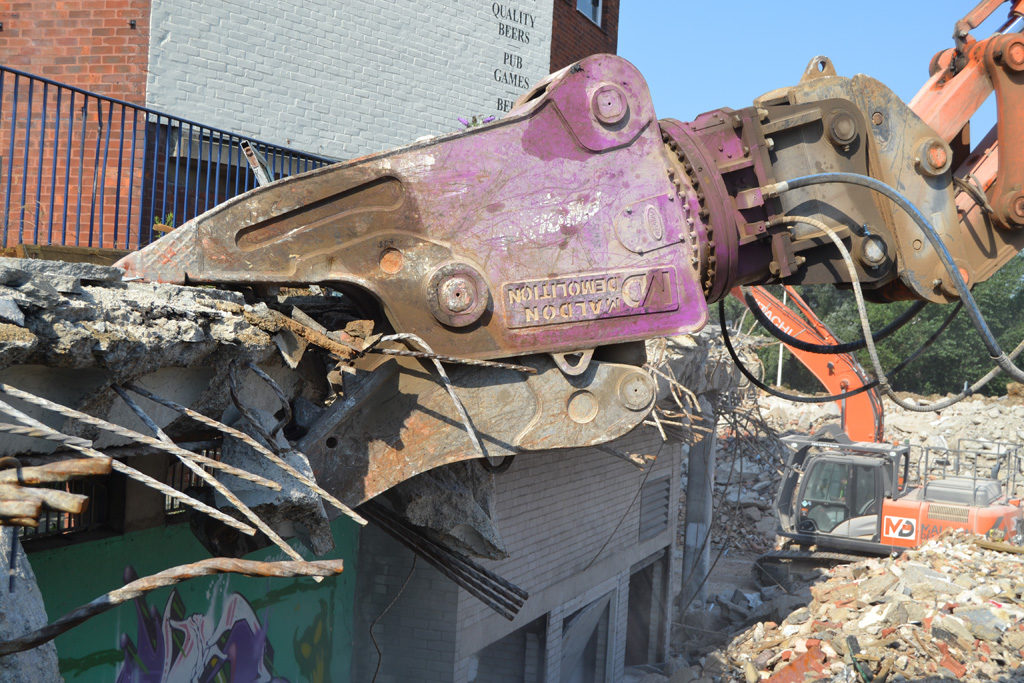 It is Maldon’s PHP450R – carried on a Hitachi 490 excavator with a Kocurek-modified 26 metre arm – that is undertaking secondary concrete work at what was formerly the substantial Laindon Shopping Centre in Basildon. This is the largest model in the Prodem rotating pulverisor range – and the newest to the portfolio – with a working weight of 4,219kg, and suitable for excavators in the 40-55 tonne weight class. It is the hardened teeth, made of special materials to increase durability, together with the equally robust fully reversible rectangular blades than have found favour on this Essex project. 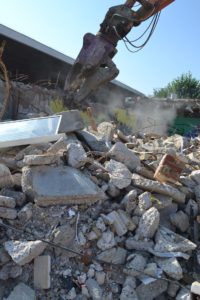 “We’ve been operating the attachment on this site for around 10 weeks now, and the teeth and blade have proven to be particularly tough. When they do need changing, because they simply bolt on, it makes life so much easier for an operator, and there’s loads of power. On this job there’s a 400mm reinforced first floor concrete slab that runs throughout the site. That includes 30mm rebar, so every bite is hard on the attachment. The wide opening jaws have coped with it very well and I’ve been cutting through up to five lengths of rebar in one go.”

There are six models of rotating pulverisor in the Prodem range, from the 550kg weight PHP050R up to Maldon Demolition’s PHP450R. Any contractor will prize easily replaceable wear parts above all else, as well as their longevity, and the optional bolt on tooth style of the units supplied by BPH Attachments, means that single teeth can be replaced. “We can also swap them from other units,” continues Lee. “Our Prodem multi-processor, for instance, has the same teeth and are interchangeable, and we’ve previously taken one from there and reduced downtime considerably as a consequence.”

“What I particularly like about the Prodem rotating pulverisor design is that there’s more than sufficient power, but that’s in quite a compact package. Visibility is important, especially in secondary concrete applications, and I’ve worked with attachments that are so bulky it’s very difficult to see. Also, the hydraulic rams have been positioned within the body of the pulverisor so they are fully protected at all times.”

Easy maintenance, and the power to do the job is an attractive proposition for a contractor and it is one that has brought Maldon Demolition back to Prodem again and again in recent years. “The right equipment helps us get the job done quicker and more efficiently and that’s what’s it’s all about in this business,” concludes Lee, “and that’s why we’re investing in Prodem.”