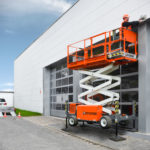 Snorkel’s new narrow rough terrain scissor lifts are proving to be a good fit for the UK & Irish construction sector.

Designed to handle the toughest jobsite conditions, rough terrain scissor lifts are a common sight on most construction projects. Equipped with powerful four-wheel drive, they are available in full-size and compact versions, depending on the application.

At Snorkel, compact just got slimmer. The company, which produces a line-up of three ‘standard’ compact rough terrain scissor lifts, recently expanded its global offering with two new slimmer models. The S2255RT and S2755RT are just 1.45m wide, a significant reduction from the ‘standard’ versions produced by most manufacturers’, including Snorkel, that measure in at around 1.8m.

Not only are the lifts slimmer, but they are also carrying less weight. The smallest model, the S2255RT weighs just 2,410kg, and the larger S2755RT weighs in at just 2,750kg. This means that the lifts can be transported on a conventional plant trailer, enabling tool and plant hire companies to provide low cost, rapid response transport solutions for their customers.

Despite the reduction in width and weight, Snorkel has managed to maintain the same performance as the ‘standard’ rough terrain scissors, and well as comparable lifting capacities, with the S2255RT and S2755RT delivering 420kg and 300kg respectively.

Interestingly, these lifts are not a new development. Snorkel’s engineering team at their manufacturing facility in New Zealand actually designed these units in 2006 in response to local customer demand for a narrower width rough terrain scissor lift that could be easily transported by contractors using a tandem trailer.

The lifts were designed, tested and produced in the New Zealand facility solely for the Australasia market for a little over 10 years, before Snorkel decided to roll out the concept to other regions. Shown for the first time in Europe in 2017, Snorkel took the S2755RT to APEX trade show in Amsterdam, The Netherlands to gauge interest in the units.

Customer feedback was positive and early sales were made with production remaining in New Zealand. In 2019, in response to increasing demand for the models, Snorkel commenced production in its UK manufacturing facility in Washington, Tyne & Wear, and now is supplying a growing number into the UK and European markets, as well as exporting to the U.S. and beyond.

So, how are UK customers embracing the slimmer scissors? Andrew Fishburn, VP of Strategic Accounts (EMEA) for Snorkel, and Managing Director of Snorkel UK, explained that a lot of the rough terrain scissor lifts that you see on jobsites are provided through the equipment hire channel, and as such that is where he has focused on introducing the slim versions.

He said that the response towards the slim scissors in the UK and Ireland has been very positive, and they are already available in many hire fleets across the country, with more on order.

“The narrow scissors are being very well received in the UK and Ireland. Due to space constraints, many light industrial units are being built closer together and cladding contractors have been able to use these machines to skin the sides of these units without the use of scaffolding.”

A benefit of the narrow models for hire companies is that they can be hired out either as a specialty product for accessing specific confined spaces, such as a jobsite accessed via a narrow space between existing buildings, or can be simply hired out as a ‘standard’ rough terrain scissor lift as there is no difference in performance.

A company who appreciates this is CPH Plant & Platform Hire in the Republic of Ireland. They added a S2755RT to their fleet in summer 2019, and it has been on hire ever since, but mainly as a diesel scissor lift, rather than specifically due to its width. However, Jim Dundon, owner of CPH said that they chose to add the S2755RT to our fleet because it is unique, and recently purchased an additional model.

“While we may not have customers every week who need a rough terrain machine that can fit in a specific tight space, our customers are working on increasingly confined jobsites and the feedback received so far is that the S2755RT does everything the standard diesel scissor lifts will do, but it is much easier to maneuver around the site, and can get into spaces that they previously could not access.”

According to Andrew, there is nothing like this on the market already, without going to a specialist supplier. He believes that as our towns and cities are becoming more densely populated, demand is going to increase for lifts which deliver the same or better performance than currently available, but from increasingly compact footprints and electrically powered for zero emissions and less noise.

Currently, the north-east based manufacturer offers the S2255RT and S2755RT in two power source options. They can be supplied as a Kubota diesel variant, or fitted with Snorkel’s innovative bi-energy system that enables the lift to be switched between the diesel engine and full electric battery power. This provides a zero-emission option, and the flexibility to use the lift either indoors or outdoors, as non-marking high grip tyres are fitted as standard.

It seems that the S2255RT and S2755RT are a great fit for hire companies and construction contractors alike, and that they are finding their place on jobsites across the country.