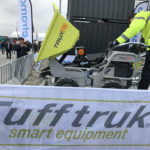 With significant expansion and new product lines, the Staffordshire manufacturer Truxta is continuing to talk ‘Tuff’

Mechanisation is now more than well-established on site but there are still some parts of the build process where we might lag behind our continental cousins. The Truxta from Tufftruk has become a successful British export, for instance, with significant sales growth in Europe and across the Atlantic year on year, but many British contractors, particularly on smaller sites, could equally benefit from the productivity gains associated with a pedestrian mini dumper.

Whilst room for growth there undoubtedly still is, consistent expansion over the last few years has seen the company relocate to a new 7,000 sq ft home in Leek, Staffordshire – a considerable upgrade on its previous premises. From here the established range of powered wheel barrows will be assembled and distributed, whilst they are now joined by a new line bearing the ‘Tuff’ brand. Launched into the UK at Plantworx, the Tuffbelt conveyors are already well established across the Channel, with the Belgian manufacturer, Etramo counting the likes of Loxam and Boules amongst its customers. 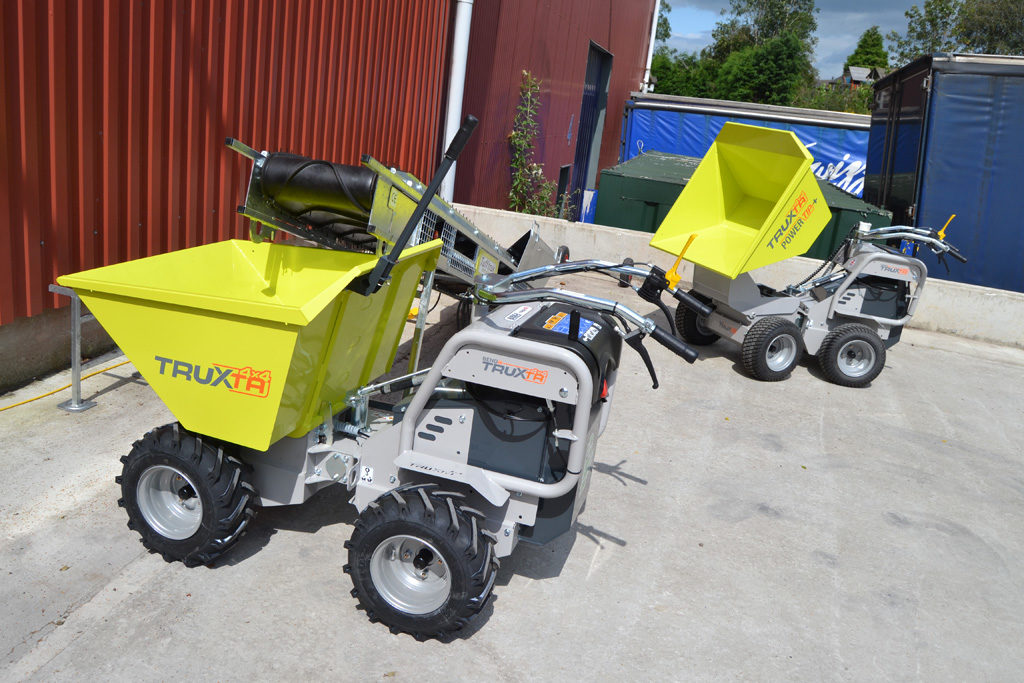 In the UK hirers will no doubt see the benefits of a solution that combines simplicity with durability. Tuff by name and tough by nature, these are units with the kind of inherent robustness that rental demands, with reliability enhanced by a simple mechanical construction, and a sturdy galvanised steel frame. Thanks to the pallet fork pockets on the side, transportation with a telehandler or fork lift is easy, and up to six can be stacked vertically, whilst the addition of a wheel kit means each one can easily be pushed around site by one person.

In use the Tuffbelt has any number of applications, and will no doubt find favour in the likes of the still prospering basement construction market but, because several conveyors can be linked together using just one power source, and considerable lengths achieved in the process, any number of projects can benefit, from landscaping and renovation to demolition. There are a variety of sizes available from 2 – 6 metres, with a moveable support that allows each Tuffbelt to be placed exactly above the next one. Not only that, but because they are completely independent of each other they can also be set up at an angle. There is just one belt speed of 24m/min on these 110V machines, which will convey up to 50 tonnes per hour, it can be easily cleaned, and the belt is provided with the reassurance of a 5 year guarantee.

The same manufacturer’s Truxta mini dumper has already found fans in the construction sector, with its hydrostatic drive, compact dimensions and articulated frame making it a manoeuvrable solution on even the most compact of sites, where it will even fit through doorways. Add to that a choice of skip capacity of either 300kg or 450kg and a single groundworker armed with one of these green machines will be considerably more productive. 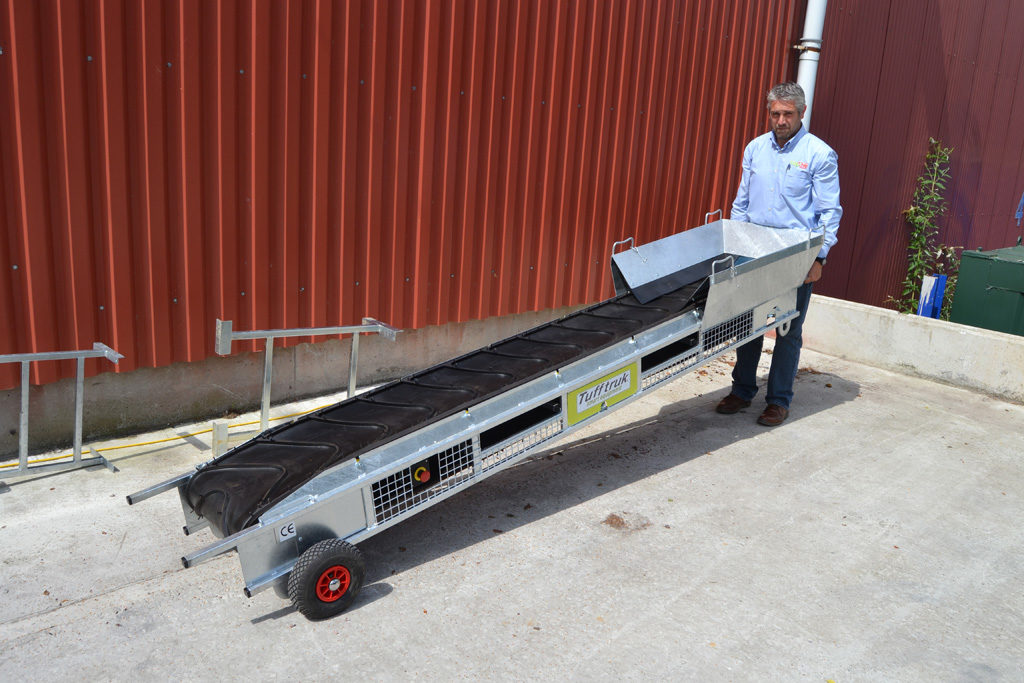 Not only are they the colour associated with sustainability but, with 90 per cent of machines sold powered by nothing more than a 240V electric motor, there’s no noise, no fuel, and no emissions, a considerable advantage in operation within our inner cities. Alternatively, petrol or diesel powertrains are also available.

Thanks to a new development, however, the Truxta and Tuffbelt can now come together as a single materials moving solution. The larger Truxta 450 mini dumper is now available with an electric powered tipping ram. As a result, the Power-Tip model has an increased skip discharge height of 252mm, with the Power-Tip-Plus increasing that height to 589mm, which makes it ideal for conveyors. There’s a steady movement for controlled tipping of the likes of concrete and, because the skip capacity and dimensions remain the same, existing owners of the Electric Truxta 450 have the option of retrofitting the Power-Tip or Power-Tip-Plus system.

Industry insiders will, of course, already be aware that the team behind Tufftruk, Andrew Simpson and Ron Blackhurst, already have a wealth of experience in the light construction equipment sector, with the likes of Bergmann in Germany and Multiquip in the US already buying into the Truxta concept. With its new range of conveyors these ‘Tuff’ customers have come up with another belting idea. 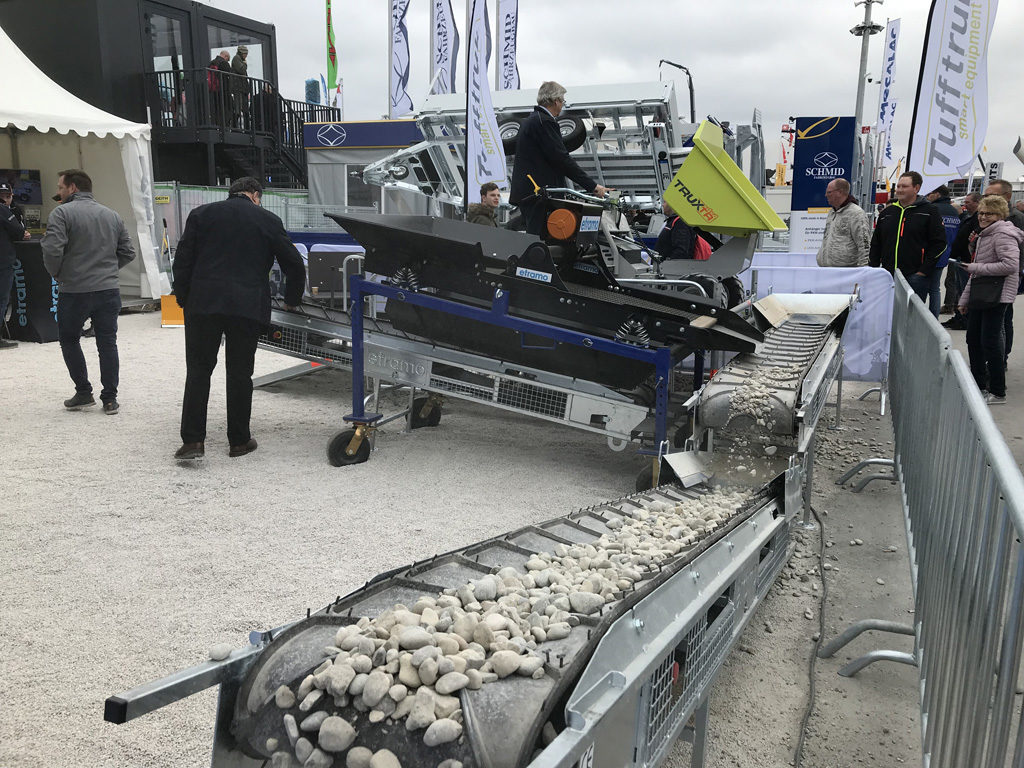