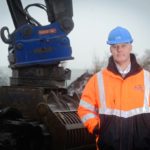 Demolition leader calls for a re-think on scaffolding

The managing director of an East Midlands demolition contractor has called on his industry to change its mindset in the wake of a spate of scaffolding collapses.

This year has seen several scaffolding failures on projects – three in August alone in Reading, Liverpool and Nuneaton, with three injuries reported at the Reading incident.

Richard Dolman, managing director of AR Demolition and vice-president of the Institute of Demolition Engineers, said it was time for the sector to consider new ways of dust suppression and protection from flying debris on demolition jobs.

He has invented a modular debris protection frame and has pioneered the use of blast mats – methods which have been successfully used by AR Demolition on contracts in Nottingham and Cardiff over recent months.

Now he is calling on other contractors to embrace change and modernise, in order to increase levels of safety, efficiency and cost-effectiveness.

“For many years, I’ve never understood why people think is a good idea to fasten scaffolding to a building, then demolish the structure behind the scaffold using a machine,” he said.

“Scaffolding is useful if it’s used to take a building apart in reverse of how it was constructed, but I’ve never thought that it goes well with big machinery.

“It’s not even great for stopping dust because the minute you dissemble it, the dust goes everywhere. If there’s structural collapse, you’re in real trouble as the recent incidents show.

“Our modular frame system took six months to design and can be transported in sections and bolted together in a day. The mats hang off a crane or a demolition rig – they’re six metres wide, 15 metres high and act as shield to stop debris and dust. Only a few companies use it and as far as I know we’re the only one which uses an incorporated jet system to spray water back on to the work face.

“Both systems are very unusual but they work brilliantly – as long as used they’re used within the right application and well within an exclusion zone – and we’ll be using them on several jobs over the next few months.”

“Correct exclusion zones are crucial. Clients often push for small zones, not letting us close footpaths and roads. But in explosive demolition the exclusion zone has to be a radius three times as wide of the height of the structure. So why is that not the same with non-explosive work?”

AR Demolition is an award-winning contractor based in Carlton near Nuneaton, which in the past three years has invested heavily in cutting-edge machinery.

Mr Dolman said he is keen to develop the company into a new type of demolition contractor – one where quality, safety and innovation in sustainability and recruitment are at the forefront – and he encouraged other contractors to follow his lead.

“Of course, embracing new technology requires investment,” he said, “but the fact is that many contractors are set in their ways and afraid either of costs or of change.

“To my mind, these are simple things to do and the benefits are widespread for the client, the public and for demolition staff.

“Without scaffolding you don’t need people working at height, which as we all know is the biggest cause of serious injury throughout the construction industry.

“And scaffolding also gives the public a false sense of security, making people walk right next to a building being demolished rather than giving it a suitably wide berth.

“Let me emphasise that I’m not saying there is no place for scaffolding in demolition. There are occasions – mainly during floor-by-floor, very controlled, small-scale demolition – when it is the most appropriate method of dust suppression and protection against debris.

“I just think that there are better methods which should be more commonplace. My fellow contractors should embrace change, not be afraid of it.”