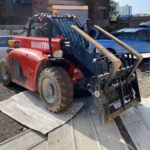 AMI’s monitoring station received a phone call early morning from a customer reporting the theft of the Manitou Telehandler the machine which was fitted with the AT3 – a wireless, covertly installed battery-operated tracking device from AMI Group.

AMI immediately placed the AT3 tracking unit into ‘finder mode’ so that the exact location of the stolen machine could be determined. The AT3 utilises state-of-the-art GPS (Global Positioning System), GSM (Global System for Mobile Communications), with highly sensitive assisted GPS positioning accurate to within 1 metre.

One of AMI’s finders set off in pursuit of the stolen machine and the AT3’s GPS signal led the finder to a yard in Salford, hidden behind steel gates.

From the AT3’s GPS signal, AMI Group gained a positive sighting of the stolen Manitou and the police were able to enter the site and recover the machine. The owner of the compound arrived which lead to their and another members arrest in connection to this theft and other stolen assets in their possession. AMI’s customer was able to recover the stolen machine on the same day, just hours after first being reported as stolen.

AMI Group was established in 2004, offering state-of-the-art telemetry and tracking systems and technology to a wide range of markets including construction and plant hire. To date, more than £350 million worth of customer assets have been protected with AMI tracking devices, and AMI systems are utilised by many of the UK’s leading plant hire organisations, commercial fleet operators, and small – medium sized businesses nationwide.