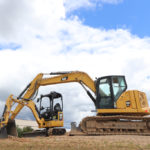 Nick Johnson makes good use of the Customer & Training Centre at Desford to try out new mini and midi excavator ranges by Caterpillar.

Caterpillar is particularly known for its big machines and on its large stand at Bauma this year much attention was paid to the flagship D11T bulldozer, the 992K wheel loader and the 777G rigid dump truck. But amongst the somewhat smaller exhibits were the first of the new generation Cat compact excavators with some very interesting features.

Whilst Bauma in April was the international debut for the new Cat compact excavators, the smallest unit was unveiled in the UK at the Executive Hire Show in February. This surprise appearance indicated the determination of dealer Finning to sell more mini excavators into the competitive UK rental market.

Whilst Caterpillar is a very respected name it is up against some very popular and well-established mini excavator brands in the UK. The company entered the mini excavator market later than others in 1998 through the Shin Caterpillar Mitsubishi joint venture with machines made in Desford, Leicestershire. In subsequent years the range expanded and other Caterpillar factories around the world took over making different models.

Since 2010 Caterpillar has sourced its smallest (under 3.0 tonnes) mini excavators from Wacker Neuson in Austria under a badge engineering agreement. However, in 2016 Caterpillar announced that it intended to shift design and production of small minis to its own facilities and the new models that have appeared this year are the result.

These new all Cat minis all utilise a 14,3kW (19.2hp) Stage V emissions compliant Cat C1.1 three-cylinder diesel and load sensing hydraulics. They are being produced at Caterpillar’s factory in Wuijang, China with their engines coming from the Caterpillar factory in Wuxi, China. The machines also utilise Bosch Rexroth pump and Husco valves.

An exclusive feature for the new Next Generation models is the stick steer system that Caterpillar has previously used successfully on its skid steer and compact track loaders. Now installed for the first time in an excavator, this system allows the operator to switch (with the touch of a button) from conventional lever/foot-pedal steering controls to left-hand joystick control.

The stick steer system has also been deployed in the Next Generation of Cat midi excavators. The six new midi models are the 307.5, 308 CR, 308 CR VAB with a variable angle swing boom, 309 CR, 309 CR VAB and 310. Also made by Caterpillar in Wujiang for Europe (with another production centre in Athens, USA) they have maximum operating weights from 8.2 to 10.2 tonnes and provide standard dig depths from 4,107 to 5,174 mm.

Examples of the new range created a lot of interest at the recent Plantworx exhibition where there was no D11T distraction on the stand. And, after the show, I visited the Caterpillar Customer & Training Centre next the Desford factory to try out some of the new generation machines. Luckily by then it had stopped raining!

The classic roots of Caterpillar are very evident as you approach the Caterpillar Customer & Training Centre, as there is a very well preserved Cat D8H cable dozer of 1958 vintage at the entrance. Regrettably I was not able to drive this beast from the past but there were several New Generation excavators waiting for me in the Centre’s digging area.

Given its suitability for UK hire companies I first took a close look at the smallest of the newcomers – the 301.5 standard tail swing mini excavator. Only available with canopy, it is the entry level model in the range but it does come with many of the new features including stick steer, an intuitive Next Generation LCD monitor and industry firsts for this size of machine – stick steer and cruise control.

Caterpillar claims that its new 1 to 2 tonne mini excavators provide up to 15% lower total ownership cost (compared to previous models) due extended service intervals, more common parts, lower repair costs and the use of a tilt-back canopy / cab. The company also contends that the newcomers are up to 20% more productive (versus competition) in travel and trenching aided by customisable operator settings and cycle time improvements.

I went trenching with the 301.5 at Desford and I was impressed by its performance. There was plenty of digging power and the slew was very precise. Fuel economy is added by the new auto idle function and there is a clear fuel gauge on the well-positioned LCD monitor.

The most interesting new feature on this and the other new generation Cat compact excavators is the stick steer function. By depressing a prominent yellow button on the top of the left hand joystick this control changes from the usual dipper and slew function to travel direction and steer.

The 301.5 retains the usual travel levers but using joystick steer means you can move the machine whilst still sitting back comfortably in the seat. No more hunching forward over the travel levers which, when traversing rough ground, is not good for operators with bad backs.

I found that the stick steer function helped me to more quickly backfill the trench that I had dug. The joystick control of the steering made it easier to do spin turns more comfortably. And usefully the mini also benefits from having both two speed (2.9 and 4.4km/h) tracking and dozer float as standard.

Caterpillar does offer a machine with the travel levers removed, thereby providing clearer floor space and eliminating the risk of clothing getting caught. However, when operators switch between different makes and models of machines there is an argument for more, rather than less standardised control layouts. Perhaps more machines need to be equipped with QR codes through which to obtain operating information or even an Alexa or Siri type virtual assistant to provide vocal instructions?

Caterpillar places great store on promoting its excavators as mobile tool carriers and the line-up of the new minis at Bauma saw them carrying a variety of attachments including breakers and augers. The demonstration fleet at Desford also included machines with attachments other than digging or grading buckets.

An interesting attachment was the 737mm diameter rotary brush fitted in place of the usual log splitter cone on the Exac-One Black Splitter carried on a 2.1 tonne 302CR. This compact radius machine was fitted with a sealed and pressurised cab which, like all the cabs on the New Generation Cat compacts, comes with air conditioning as a factory option. A welcome bonus for operators on hot summer days. The compact radius superstructure and extendable (1,090 to 1,400mm) undercarriage aids stable working in confined area.

Another Exac-One attachment was coupled onto a new canopy equipped 1.7 tonne class 301.7CR. This was a 800mm cutting width Osmar TE80 DXL Mini Mower from Exac-One. So I went bank mowing with a mini excavator.

Using a mower attachment on an excavator can prove problematic due to the need to provide sufficient hydraulic flow to the attachment whilst maintaining a steady slow speed travel. But these new Cats with their standard stick steer and cruise control features are ahead of the game.

The mower was positioned on the bank and set in motion and a suitable travel speed was selected before the cruise control button on the front of the left joystick was activated. Caterpillar would, of course, advise to always keep hold of the controls when operating but the machine did continue to cut the bank without me having to hold them. As soon as any control on the machine is touched the cruise control is instantly disengaged.

Both the 308CR and 309CR models (with standard monobloc or variable angle booms) have high flow (140l/min) auxiliary hydraulics to power more heavy-duty attachments. To show off this extra capability a 309CR High Flow machine at Desford was fitted with a 1,012mm working width Cat HM210 mulcher.

I tried out the top of the range 310 with a newly designed and dedicated excavating bucket on the bank at Desford. This machine was fitted with the extra 250kg rear counterweight so it was nice and stable. The 310 dug well and the standard fitment of a dozer blade adds operational versatility.

The addition of these New Generation compacts – with the promise of more intermediate sizes in the future – augers well for greater sales. Cat excavators are now a more common sight in the UK and Finning has gained more ammunition to propel (or should that be stick steer?) the marque further up the sales league.

For more stories on the latest excavators available in the industry, click here.