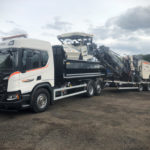 “From our first conversation with Andover 11 years ago it was clear they understood the specific requirements for the planers we transport,” declares Mark Ward, Director at Ward Plane, “and the two trailers we received were obviously built to last.”

For its latest acquisition, Ward Plane has deviated from the tried and tested lightweight trailers it first specified in 2008, opting to take advantage of Andover’s bespoke design approach to develop a heavy-weight version, which offers greater versatility in the loads it can carry. This new trailer has entered the fleet alongside a new light-weight model, both built to order.

“When it came to these new builds, we wanted to explore a more heavy-duty alternative for one of the units. The team at Andover were more than happy to work with us on the new design, and the result is a trailer that will have a huge impact on our operation – it’s this level of service that’s tough to match in the industry.”

The heavy-duty drawbar boasts a 6m deck with a 1.4m beavertail and has a payload capacity of 18 tonnes. The trailer includes a number of features designed to improve operational efficiency, without impeding performance. The front SAF axle has been fitted with hydraulic lifting capability, which helps to lower tyre wear when running empty or partially loaded, while the 1.2m full-width ramps have an expanded steel mesh covering to help reduce wind drag.

As part of the design, Andover also built in additional strength throughout the centre of the trailer for the specific point loads of Ward Plane’s three-wheeled machinery, allowing the company to carry various combinations of planers, paving machines and road rollers to sites nationwide.

“We have specified heavier trailers from competitor manufacturers in the past, but they simply weren’t up to the job and it wasn’t long before the cracks started to show – quite literally. With the ability to specify exactly what we needed, we’ve now got a trailer capable of handling anything we want it to, for years to come,” adds Ward.

Ward Plane’s new light-weight trailer is the same model as its previous two Andover-builds, one of which is still in operation in the company’s five-strong trailer fleet. Designed specifically for Wirtgen W100 and W120 planers, the ‘simple’ design features three fixed axles, a 5.5m deck and beavertail, with 1m alloy rear ramps. The lack of hydraulics in the design, combined with Andover’s light-weight steel construction techniques, produces a payload capacity of close to 20.5 tonnes.

Both new drawbars will operate from the company’s Keighley base, and are expected to stay in the fleet for at least 10 years. They will be towed either by the company’s tipper or hook loader trucks, delivering road surfacing equipment to sites primarily in the north of England, but with the capacity to travel across the UK.