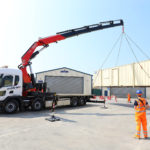 A North East-based hirer of portable site accommodation and secure storage containers has taken delivery of five new delivery vehicles after investing over £2.5 million in its industry-leading fleet to increase operational efficiency and customer service.

The new vehicles, which bring Mobile Mini’s fleet to a total of 62 – ranging from 31 to 82 tonnes per metre – represent a significant upgrade to its existing fleet of lorry-mounted loader crane vehicles, one of the largest of its kind in the UK.

All trucks are new generation Scania 8-wheelers with FASSI F820ra.2.26xhe-dynamic complete with FASSI FSC-SII stability control system and will be used throughout the UK from Mobile Mini’s 15 branches. The cranes will enable easier positioning of units in heavily built-up areas, while improved lifting capacity makes double and triple stacking units easier and safer.

The new trucks will be used to ensure the safe, efficient and effective delivery of Mobile Mini’s extensive range of units with additional features including low-level door windows for improved visibility of vulnerable road users.

As part of the company’s commitment to the highest possible safety standards, the trucks are fitted with a Brigade HALO system, featuring sensors to alert drivers to bicycles and pedestrians, an audible and visual warning and an in-cab monitor that provides the driver with a 360° view. Additionally, LEDs leave a ‘halo’ on the ground to alert cyclists to the truck’s presence in the dark.

All vehicles in the fleet are Fleet Operator Recognition Scheme (FORS) compliant and, being 5% more fuel efficient than previous models, and incorporating cruise control with active prediction, using topographical map data of the road network, the additions enable the company to reduce fuel consumption and better serve the environment.

Mobile Mini’s National Transport Manager, Andy Cowell, said: “This is a small part of our continual investment as a company, as well as in our transport model, that helps us to build on our strong reputation for service and safety excellence.

“Making regular improvements to our fleet is important to keep pace with customer and legislative demand and we are already looking ahead as far as 2022, especially when it comes to legislation surrounding inner city deliveries that require higher safety and emissions specifications.

“By adding larger cranes we are able to take more control over our full-circle operations and look after the full process rather than contracting external suppliers, meaning the customer is always guaranteed Mobile Mini service standards.”

Mobile Mini’s excellence in logistics has been recognised by the FORS, an accreditation aimed at driving up standards among commercial vehicle operators throughout the UK, having been awarded the highest honour of a gold standard for seven years in a row.

Continuing its commitment to investment, and in an effort to address the shortage of Heavy Goods Vehicle drivers, the firm has also launched a fully-funded Driver Development Programme offering training for both internal and external drivers.