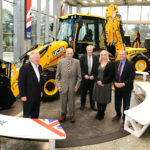 Long-standing customer JC Balls & Sons has added a milestone machine to its fleet – the 750,000th backhoe loader made by JCB.

JCB marked the production of its 750,000th backhoe earlier this year and now Ambergate-based plant hirer and contractor JC Balls & Sons has purchased the landmark machine – a 3CX model – nearly 60 years after buying its first JCB.

Coinciding with JCB’s 75th anniversary, the backhoe loader was presented to JC Balls & Sons by JCB Chairman Lord Bamford at the company’s World Headquarters in Staffordshire.

JC Balls & Sons Director, Kevin Balls said: “We are delighted to purchase the 750,000th JCB backhoe loader. It’s very fitting given the wonderful long-standing relationship between our two companies. The JCB backhoe loader is a machine which has played a huge part in our own company’s success story, so we simply had to buy this model.

“We’ve dealt with JCB since 1963 and they are the best. Everything JCB makes, we have. We choose JCB for the quality, service and back-up. It really is first class; any problems we have are sorted in hours. One of the reasons we’ve stuck with JCB is the service, we’re incredibly well looked after by JCB and our dealer TC Harrison JCB.”

JCB celebrates its 75th anniversary this year and JC Balls & Sons has been a loyal customer for much of that time, since Founder Jim Balls established the company in 1963 with his very first JCB: a JCB3. He has bought JCB ever since.

At 92-years-old Jim Balls is still a Director of the company and his sons Kevin and Christopher, Kevin’s children Carly-Ann Balls, Hollie Marriott and Tom Balls and Christopher’s children Jamie Balls and Lisa Freeston now also work in the business which has evolved into the leading plant hirer and contractor in the East Midlands, specialising in earthmoving and bulk excavation.

The 750,000th backhoe is one of JCB’s brand new 55kW 3CX models with EU Stage V compliant engine introduced this month. The machine delivers improved operator comfort and ease of use, increased productivity and performance, combined with reduced total cost of ownership.