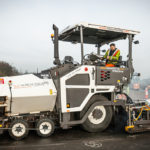 “We’ve been very pleased with the performance and reliability of the P6870C over the last three years but, more importantly, we’ve been impressed with the level of after-market support, care and attention we’ve received from the team at SMT GB,” comments Joint Director Darren Jones. “Wanting to keep our front-line machine fresh and in tip-top condition, we had an opportunity to replace the three year old unit for a new model with some additional features added to it, so choosing another Volvo made perfect sense,” he continues. “The overall build quality and low noise emissions are impressive and it lays an exceptionally high quality mat. The machine is highly maneuverable and it demonstrates a superior ground clearance when working around raised ironwork. Our crews appreciate the user friendliness of the Volvo paver as well.”

The P6870C is powered by a Tier 4i D6 Volvo engine, which develops 175hp. At its heart, the P6870C features the EPM II, which is an electronic paver management system that incorporates a ‘Settings Management’ system, allowing the operator to store up to twelve parameter settings for the major functions, such as; screed temperature, tamping & vibrating, conveyor, auger and paving speeds. The machine is also equipped with other unique features such as the ‘Smart Power’, which offers optimum power for the job at hand, together with 6×6 ‘Smart Drive’ technology for unparalleled, continuous independent traction control over all six wheels. Even on the most difficult bases, tractive forces are automatically adjusted according to the weight of material in the machine’s 12 tonne capacity hopper.

Screed performance is a distinct feature on Volvo pavers. The P6870C has a variable screed width of between 2.5 and 5 metres in standard configuration, as supplied to N.E Surfacing, but can be fitted with optional extensions to provide a generous width of 9 metres. The machine has a theoretical output of up to 700 tonnes per hour at varying screed widths and depths. It also demonstrates a high degree of manoeuvrability, thanks to the ‘Active Steering’ feature with an inside turning radius of just 2.5 metres.

Joint Directors Darren Jones and Dave Parker established N.E Surfacing Ltd just seven years ago. The company now employs around 30 personnel and undertakes surfacing contracts throughout the country. The new paver has been supplied in a white livery with a striking poppy motif and the words; ‘Lest we forget’ sign written on the machine sides, together with the silhouette of a First World War soldier; a gesture of respect from the owners and employees of N.E Surfacing Ltd.