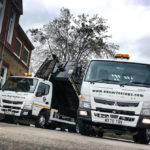 Six years after it became one of the first customers in Britain for the range-topping 8.55-tonne FUSO Canter, UK Surfacings has commissioned a like-for-like replacement.

The Surrey-based firm has also purchased a new 7.5-tonne Canter, just as it did in 2014. Again, the new truck has taken the place of the previous one.

Its new FUSOs were supplied by dedicated Mercedes-Benz Trucks Dealer City West Commercials – both brands are part of the Daimler family, and sold and supported by the same franchised network in Britain. The Dealer, which supports truck operators in the south west from its headquarters in Avonmouth, and other branches in Exeter, the Somerset town of Highbridge, and Roche, in Cornwall, took back the older vehicles in part-exchange.

The family-owned contractor operates from premises in Tadworth, and specialises in asphalt surfacing. It works closely with local authorities and developers on commercial projects such as car parks, industrial flooring, playgrounds and road repairs, while also serving domestic clients, for which it typically provides new, and in many cases decorative, driveways and paths.

Purchased primarily for their market-leading weight carrying capacities, the new trucks are fitted with tipping bodies by Euromotive, of Hythe, Kent. The same company built the bodies on UK Surfacings’ first Canters.

Though also rugged and durable, thanks to its tough, ladder-style chassis, the 7.5-tonne Canter is light enough to offer an exceptional body and payload allowance of just under 5.0 tonnes. This exceeds those of more conventional trucks in the same gross weight category by anything up to 1.0 tonne. With an allowance of almost 6.0 tonnes, meanwhile, the 8.55-tonne Canter is on a par with a 10-tonne GVW truck in terms of productivity.

The Canter’s cab-over-engine design contributes to its relatively compact footprint and impressive manoeuvrability. The 8.55-tonne model is similar in size to its 7.5-tonne sibling, and therefore every bit as well suited to operation in busy, built-up areas, and on private driveways.

Diesel-engined and well-established hybrid Canters – there is also a fully-electric version – employ the same, advanced 3.0-litre common-rail powerplant. In the 8.55-tonne 9C18 this unit produces 129 kW (175 hp) and up to 430 Nm of torque across a broad engine speed range, and is paired as standard with the six-speed DUONIC fully automated dual-clutch transmission. UK Surfacing’s 7.5-tonne 7C15, meanwhile, offers 110 kW (150 hp) and 370 Nm of torque – although a five-speed manual gearbox is also available, the operator chose the DUONIC transmission for this truck as well.

Established in 1999 by Managing Director Tony McVea, UK Surfacings works throughout London and the south east. The Canters carry broken Tarmac and other spoil away from sites, and deliver fresh, hot material straight from the plant. They also tow pedestrian roller and hydraulic breaker machines.

Mr McVea’s son, also Tony, is the company’s Operations Director. “I’d have no hesitation in recommending the Canter, as it’s a great truck,” he enthused. “We ran our last two for six years and were more than happy with them.

“We had no major problems in that time, while the Canter’s extra payload makes all the difference. The 9C18 will carry just shy of four-and-a-half tonnes of Tarmac, while the 7C15 takes about a tonne less. Residential driveways often require eight tonnes of material, so we’re probably sending both trucks to the same jobs a couple of times a week. If we were using other vehicles that carry significantly less, we’d have to make more journeys and, as a result, incur increased fuel costs while also producing more emissions.”

He continued: “The Canter is also that bit smaller than most of its competitors, and has a brilliant turning circle. These are big advantages when we’re working on estates or in other areas with restricted access. All of which explains why, when the time came to replace our original trucks, we had no hesitation in going back to Ian for a couple more.”

Mr McVea said that due to Covid-19 social distancing protocols UK Surfacings had been sending out each truck with only a driver in the cab. In the past, however, a couple of operatives would also be on board. He predicted: “The guys will notice the difference when things get back to normal, because the new Canters are certainly more comfortable than those they’ve replaced. That’s the biggest difference between the two sets of trucks.”

At City West Commercials Ian Carlisle is responsible for sales of Mercedes-Benz as well as FUSO trucks. In his first role within the Mercedes-Benz network, though, he worked as a dedicated Canter Sales Specialist – UK Surfacing’s previous trucks were among the first he sold after taking up his position in 2014, and he went on to win a string of awards from the manufacturer in recognition of his performance.

“The Canter is a terrific product, a strong and willing workhorse that’s well suited to a host of applications,” he said. “In the key 7.5-tonne GVW segment, the vehicle’s outstanding payload gives it a major advantage over the competition.”