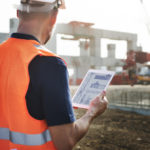 The report states that despite an increase in innovation in digitisation, industrialisation of the construction process in the eurozone is still lagging behind. For example, an employee in the sector has approximately €10,000 in machinery at their disposal – one fifth of the value available to employees in the manufacturing sector. 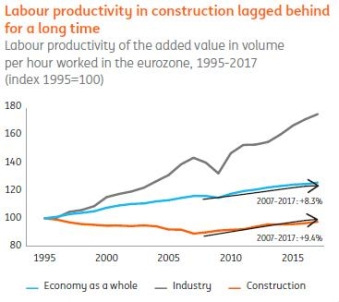 Digitisation can provide many advantages in construction, where every project often has to be designed from scratch. It increases the efficiency of the design process and enables construction errors to be picked up early in the design phase. But many other activities in construction are being performed more quickly as the world goes digital. For instance, estimates for minor maintenance jobs can be provided solely on the basis of digital photos, saving a visit to a potential customer.

… but despite new technologies, industrialisation is still facing bottlenecks
Industrialisation has not been quick to take off in the construction sector. An employee in the sector has approximately €10,000 in machinery at their disposal – one fifth of the value available to employees in industry. This is because construction companies require a very high degree of flexibility.

“Construction companies have to build something different each time, and each time at a different location,” says Maurice van Sante of the ING Economics Department. “This is taking place in a volatile market that demands quick scaling up and down. It makes sense that many construction companies opt not to invest in machinery that puts significant pressure on the fixed costs, and which can also only perform one type of task.”

Robotics (a robotic bricklayer, for instance) and 3D printing combined with prefab could offer a solution, as this allows the mass customisation and flexibility required. However, high investment costs and building at a different location each time continue to pose bottlenecks.