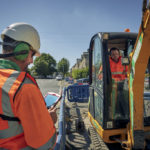 The conclusion of the first phase of its Accelerated Tender Awards Programme (ATAP) brings CityFibre’s total build contracts to up to £2.5 billion. With 26 build partners now under contract, its construction supply chain is secured for rollouts targeting more than 5 million premises across 66 towns and cities. Mobilisation of its new partners and projects is already underway, and all projects are scheduled to be in build by summer 2021.

Before the end of the year, CityFibre will launch the second phase of the ATAP through which it will award build contracts for up to a further 3 million premises. This will commit construction resource across the entirety of its up to 8 million Gigabit City Investment Programme target, which it is on track to have substantially completed by 2025 in support of the Government’s target for national coverage.

The rapid scaling of CityFibre’s rollout is being supported by Bechtel, one of the world’s leading engineering, construction and project management companies. Bechtel was recently appointed to accelerate the mobilisation of CityFibre’s construction partners and to maximise the productivity of each rollout project.

Digital Secretary, Oliver Dowden, said: “It is our national mission to connect every corner of the country to lightning fast gigabit speeds and we’re set to spend a record £5billion to achieve this.

“But we cannot do it alone so I welcome CityFibre’s substantial investment to plug millions of homes and businesses into the social and economic benefits of next-generation broadband and create thousands of jobs in the process.”

Greg Mesch, CEO at CityFibre, said: “By awarding these full fibre network construction contracts, we can ensure we have the construction resources we need to get the job done, bringing world-class digital infrastructure a step closer to millions across the UK. Each contract represents hundreds of jobs and upskilling opportunities for local people, building the networks Britain needs to survive and to thrive in a digital age.”