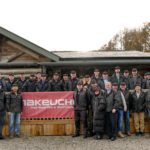 Takeuchi UK staff got together with the dealer network to celebrate 25 years in the UK and Ireland.

The clay shooting event organsied at Coniston Hall near Skipton allowed the Takeuchi Team to get together for a full day and night of celebration.

The night included various milestones both for Takeuchi and dealers. Webb Plant Sales reached a joint milestone with 25-year dealership and 1000 machine sales. Chris and Pat Webb have been there since the very start and championed Takeuchi all the way. Dealer for East of England Rob Owen reached his 10-year milestone and J Davies of Pencader in Wales reached a major sales milestone of 1500 machine sales. Staff celebrated including Mark Davies reaching 15 years of service with Takeuchi.

Amongst the team were sharp shooters including Tony Wilcox from Willowbrook who won on the day and David Mcilwraith runner up alongside some who’s shooting abilities need a little refining – naming no names.

After the long Covid break from social gatherings it was a great time to get together. Team Takeuchi had not gathered since Plantwork 2019, so the event was a long overdue team building exercise.

“Without this teamwork Takeuchi would not have had the success it has enjoyed. We would like to thank everyone involved in Takeuchi UK’s journey to 25 years,” said Holly Cooke, Marketing Manager Takeuchi UK.