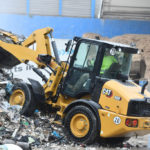 Caterpillar: The Next Generation

Many of the features that Cat users are already enjoying in its larger units are making their way down to the more compact Next Generation class of machinery.

Indeed, with the Next Generation Cat 906, 907 and 908 the manufacturer claims that it has undertaken some of the biggest changes in a solution of this kind for the last 15 years, with upgrades to the operator environment, engine and powertrain, as well as an enhanced hydraulics system.

In a first for a machine in this size, for example, the Next Generation models feature in-cab-programmable kickouts with high-definition rotary sensors mounted to the loader arms. As a result, operators are better protected from unwanted shock and vibration due to buckets striking the ground and/or hitting dump stops at max height. Proper kickout operation also saves up to 20 per cent of bucket cutting edge life. Rather than leaving the cab for setting, the operator remains inside the cab while setting upper, lower and attachment kickout positions at the touch of a button. Moreover, cylinder snubbing, eliminates the bouncing and jarring experienced when at maximum height and full dump by introducing a cushioning effect. 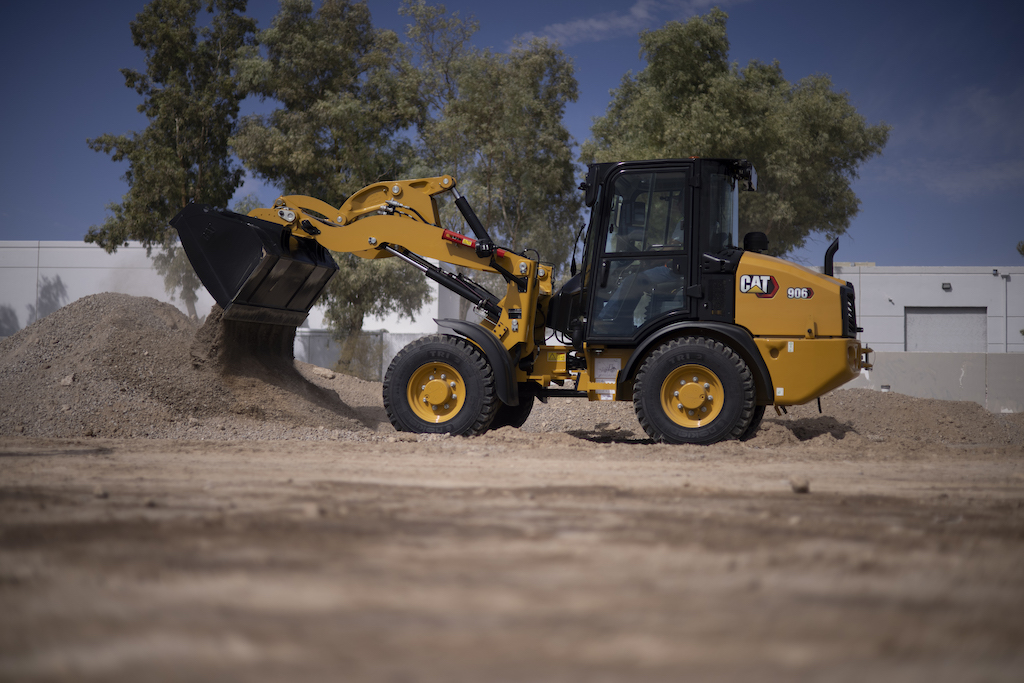 In the driver’s workstation many of the practical features from the previous generation have been retained, such as two doors and low visibility windows. The pedals are also raised for easier cleaning – a welcome detail in the rental sector – whilst there’s a storage box on the cab’s entrance side. The interior space can also be tailored to the required spec. If a basic set-up is all that’s required, for example, then the control panel can be simplified. If you’re a rental customer, for instance, this is a theme which is continued throughout the design of the new 908, where a more no-frills solution can be specified and built at the Cat factory in Leicestershire.

Conversely, a higher specification is an equally straightforward proposition thanks to some of the extras that can be easily installed by the customer. Need light guards, additional lighting or tool boxes? Well, then there’s a choice of over 50 kits that you can easily update your machine with. Furthermore, this latest Cat wheel loader proposition has been made design-ready for more complex and specialised attachments, which can be easily added by the dealer. 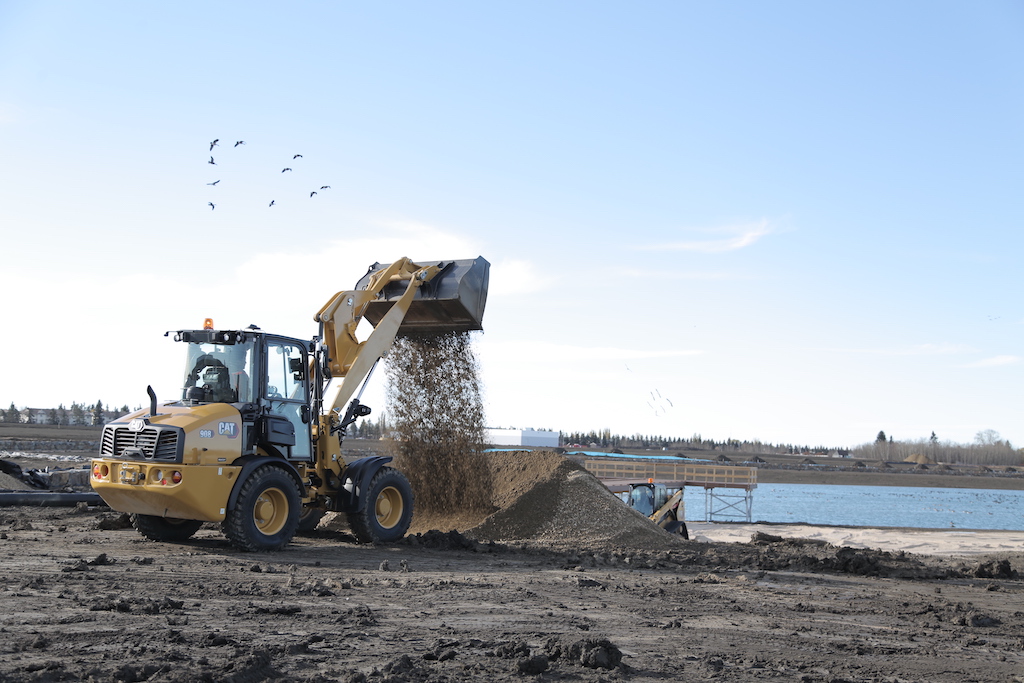 At the same time there are a number of new features actionable through the monitor, including auto engine idle shutdown. Servicing and maintenance information can be accessed, including fluid and filter management, and fuel consumption, whilst the machine set up can be adjusted depending on the job and attachment. Servicing is at 500-hour intervals, which again will be communicated through the in-cab screen.

All round visibility is boosted with a 60 per cent wider, one-piece curved screen and mirrors are larger as standard, with the option of heated and electric versions. There’s a choice of light configurations with two or four halogen or LED units at the front and rear. If you choose four at the front and four at the rear, the two outside lights can be turned 90 degrees to create a 360-degree illuminated area. The workstation equally benefits from a medium wheel loader seat in a compact machine, seat mounted controls, and 71db in cab sound.

Maintenance is facilitated with a replaceable grille in the event of rear-end damage, whilst ease of servicing has clearly been given serious thought, including the introduction of LED lights to help with checks on fluids and filters early in the morning or late at night. A reversing fan that automatically blows material away from the cooling pad will be your friend in high debris environments, and there’s a toolbox for chain and grease storage. 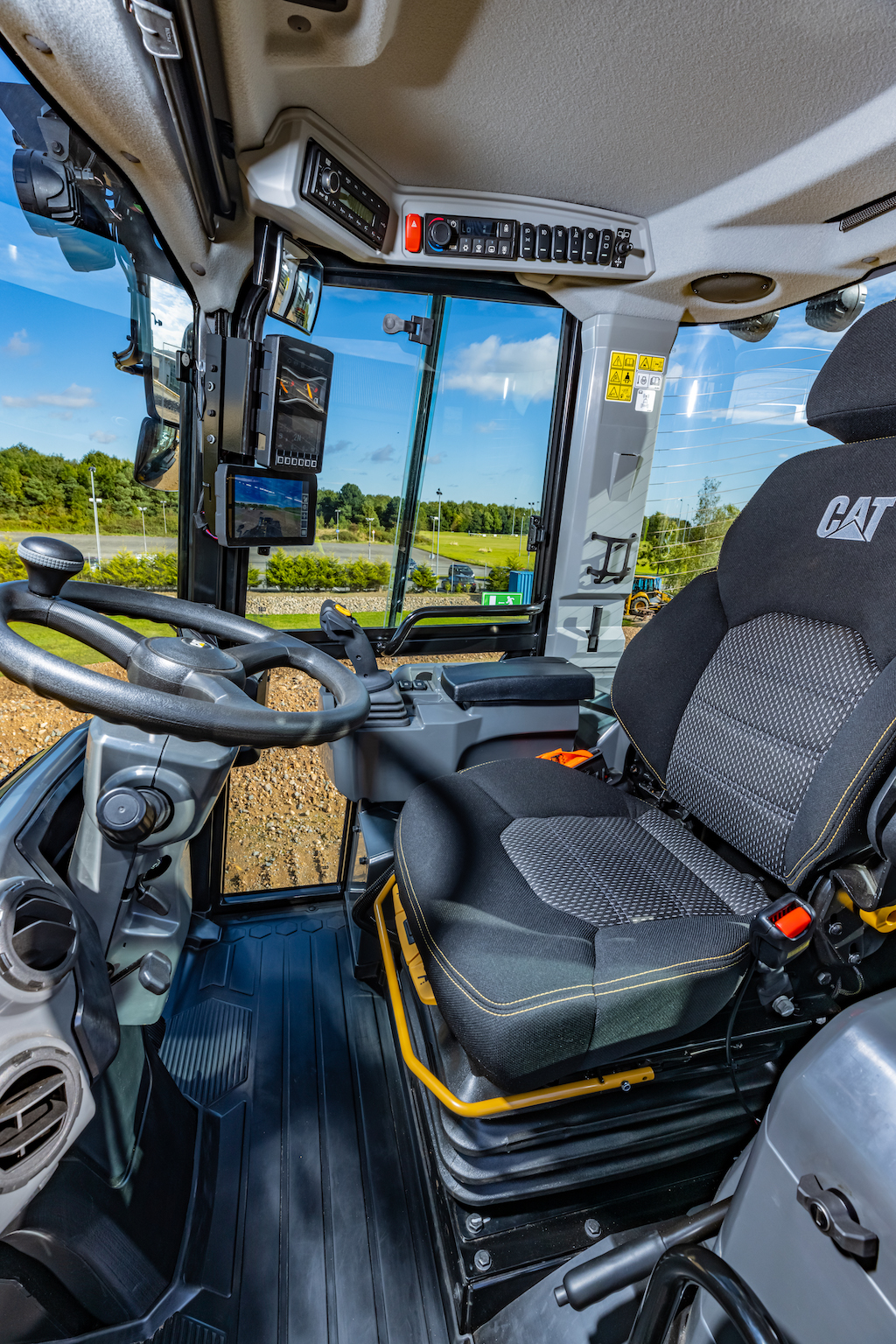 The Cat-designed, manufactured and assembled C2.8 engine, offers more torque and more power but with a very similar fuel consumption to the previous generation. The powertrain will also achieve 40kph or 25mph, and shift on the fly is a useful addition in every application, all of which means more work can be done with less energy.

The front of the machine is where the work gets done and here the loader arms have been reprogrammed, which means reach has been extended, whilst the optional skid steer coupler has been been tweaked to increase visibility.

A pressure compensative valve is now standard on Cat machines improving lift, tilt and hydro-mechanical functionality. It’s a feature which is also great for the productivity of rotating attachments like brooms and cold planers. Not only that, by the 908 Hi Lift allows reach over the side walls of a feeder wagon and will be welcome in industrial waste applications. The updated General Purpose Bucket has increased capacity, with a curved edge that helps keep material inside in all conditions, and better line of sight for the operator.

Additionally, changes to the fork carriage and smaller cross section rails opens up a viewing window from the cab into the fork tine. The rails have been repositioned to be lower, thereby moving the loader arm higher, which will help reach further across a truck to a second pallet.

The 908 machines will replace the existing 906, 907 and 908 M-Series, which were the previous Stage V solutions and will be available from the third/fourth quarter of 2022. The 906 fuel tank is 30 per cent larger than the previous M-Series, which means the unit can work for much longer, uninterrupted hours, and its 2.5m low cab height makes it a very compact package.